I have to say one game I’d really been looking to get my hands on was Dust Tactics. As I’m a nut as far as miniatures (come on you haven’t figured this out yet?) I had seen various expansions or figure releases on the FFG site and was licking my chops to tackle the title. I’ve mentioned before why I think games with miniatures have a big appeal for gamers of all stripes and Dust Tactics is mighty appealing.

It’s important to note Dust Tactics is truly a board game utilizing miniatures as opposed to a straight out miniatures system ala Warmachine or Malifaux. This means games play out within an hour or so and the fighting is fast and furious. An alternate Cold War is the setting for Dust Tactics (DT) as it’s based upon the world of Dust created by Paolo Parente. This is a world in which alien technology was discovered by both the Allies and Axis, during WWII, and they have now continued the war into the late 1940s with no end in sight. I know I’ve pointed out the Nazis just seem to continually be recycled as the big baddies but given the back story to the game, and the fact this is a continuation of WWII, I don’t see it as an issue with DT. There’s a bit of a science fiction angle but it isn’t over the top and not as if we’re talking about Space Nazis in the year 2142.

Upon opening the box you’ll see there are loads of figures included as you receive one each of the opposing forces mecha “walker” units as well as fourteen Allied troopers and a dozen Axis soldiers – all in plastic. These look to be true 28mm figures and I could easily see there was much more detail to the miniatures than the smaller scale minis that came with Mansions of Madness; this will make the figures more interesting to paint as well as making a painter’s life a bit easier too. They sort of reminded me of Tamaya model figures, although a bit larger. These figures come unpainted but are supposedly primed in a base color (they don’t feel primed to me) and have a decal attached to determine what sort of unit it is.

The walker figures are very well done as well although they do need to be assembled. If you decide to glue the walkers together you’ll find you’ll have a hard time getting them back in the box along with the other components. None of the miniatures, whether they’re humans or mecha, arn’t completely out there “style-wise” so you could easily incorporate them into any other WII alternate timeline game you might have on the shelf or cooking in your head.

I’ll have a bit more about painting the figures at the end of the review but the minis are mighty impressive. 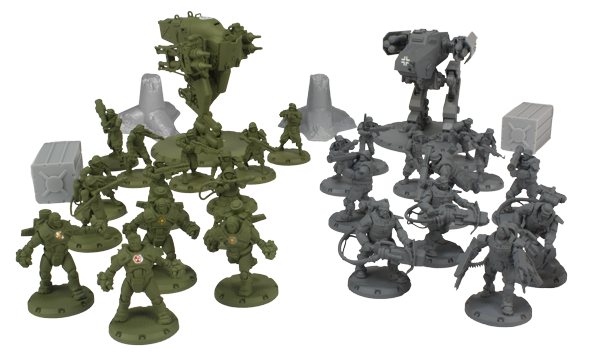 You also receive the rulebook, a scenario book entitled “Victory Bridge”, two folded terrain maps, nine double sided terrain tiles, four 3D pieces of terrain cover, six unique combat dice, as well as unit cards and a “loaded” token. The six sided dice have four faces which are completely black and two opposing sides sporting a targeting reticule. This means you have a one in three chance of rolling a success on each die. Both books are nicely presented and, seeing this is a revised ,didn’t present any serious head scratchers on the first read through.

The unit cards are in full color complete with a photograph of studio painted units. These cards are a nice size and include all of the info you’ll need about how many dice the unit rolls, what weapons they use, and so forth.

The 3D terrain is boring to the extreme. You receive two sort of crate things and a couple of pieces of what appear to be tank traps. These almost seem to have been tossed into the box as an afterthought. It’s a bit strange to see terrain tiles that are two dimensional, and can block line of sight, while also including these lame 3D pieces.

In the end, Dust Tactics really won’t jump out for those who want to get into the nitty gritty of a WWII sim or even a serious SF miniatures gamer. It won’t appeal to serious wargamers either. DT is the sort of game that will reel in those who argue Memoir ’44 is a “serious wargame” and gamers who love a great visual presentation and still be able to play out a game in an hour or so.