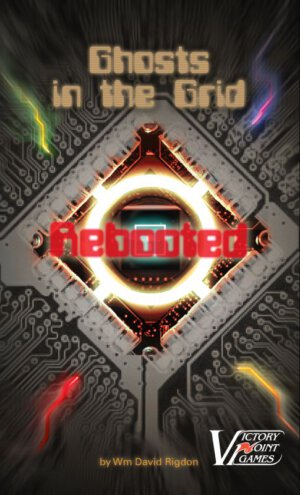 From Victory Point Games:  “Ghosts in the Grid Rebooted is a 2 to 4 player card game where each is a computer hacker (represented by their Ghost Agent marker) out to retrieve the Data. By creating the gameboard (‘Grid’) with all unique tiles, the Grid changes each time you play! Players play cards to improve their own Ghost powers, infect their opponents with Virus cards, and fix their own computer’s infections with Fix cards. The goal is to move your Ghost Agent through the Grid to gather the Data and escape with a clean (uninfected) copy of it.  If you have too many Virus cards on your Ghost Command Row at once, you will be Assimilated and will have to start over again! If all players are Assimilated simultaneously, the Grid wins and the Data is safe.  Do you think you have what it takes? Prepare yourself with Ghosts in the Grid Rebooted!”

So do you have what it takes to hack your way to victory? Let’s see! 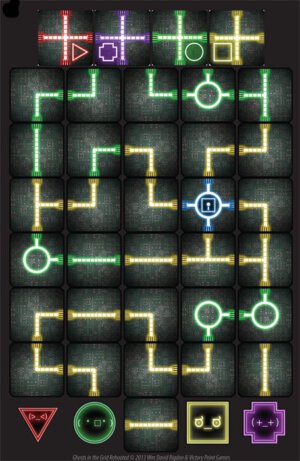 Let’s start with the box art. As with all VPG box games, this one also comes in a very sturdy and nicely sized cardboard box. The front and back box art is nice and looks very reminiscent of the Matrix movies with lots of angular art and computer-like fonts and graphics. Plus, it’s in full color; so far so good.

This is my second VPG game and have to say I cannot get over how sturdy the counters are. These little guys will not bend or fold unless you put them in a vise and take a pair of pliers to them. I really like that. The cards are sturdy but they will bend.  I’d say they’re of average density. Not too light and not too thick. The remaining components appear to be made from the same light cardboard/heavy paper stock. The art on all the components follows the box art: full color and computer-like.

For the game setup, imagine a 5 inch by 5 inch playing area which contains 25 inch squares. This will be called the Grid. The Central Node tile is placed in the middle. 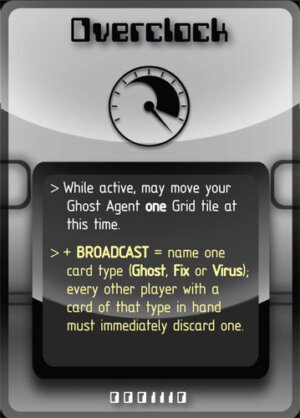 The object of the game is to acquire a Data card and escape with it, uninfected the same way you came into the Grid. The game is played like this:

Overall, I think Ghosts in the Grid Rebooted is a game which will have a very narrow audience. If your employment, degree, or interests lie in the programming arena, then you may enjoy this one. I suppose if you’re a real life hacker or even a wannabe hacker, then this title is for you as well. For the rest of us, this game may be a bit too involved and abstract for a session of casual gaming.

Overall, I think Ghosts in the Grid Rebooted is a game which will have a very narrow audience. If your employment, degree, or interests lie in the programming arena, then you may enjoy this one.