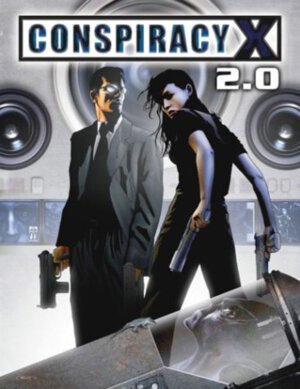 From the Eden Studios website: On the surface the world looks very much like the one outside your bedroom window. The same people are walking the same dirty streets, the same animals rummage through the same garbage, and the same mindless drivel is shown on the same television stations. Sometimes that world just doesn’t seem right. You wake up in the morning and get the feeling that something isn’t as it should be. Why do certain figures appear out of nowhere and become famous overnight? Why do the rich get richer, and the poor get poorer? What is the government really paying for when it shells out 75 bucks for a screwdriver? Why is it the more questions you ask the less answers you get? Why is it any answer always leads to another question? Sometimes you cannot see what defines your world. This is the nature of conspiracies. This is the nature of Conspiracy X. Conspiracy X takes place in a world of dark secrets and hidden agendas where the only certainty is nothing is what it seems. The president might not be human… and the sign carrying paranoid on the street corner ranting about CIA mind control satellites may very well be right. In other words, a world just like yours, if you could see beyond the lies… Welcome to the World of Conspiracy X.

This latest edition of Conspiracy X has been updated for use with the Unisystem engine and you might know this system from other Eden Studio RPGs such as All Flesh Must Be Eaten, Buffy the Vampire Slayer, and Army of Darkness. Well guess what? According to Eden, Conspiracy X is now compatible with these other titles too. Your play and game setting options have now increased.

The setting of this game is touted as having elements of covert organizations, shadow governments, aliens, paranormal events, and the like. Movies and TV shows which are mentioned as good examples of what Conspiracy X is like are Fire in the Sky, Signs, Twin Peaks, Taken, The X-Files, 24, Alias, Dark City, and Scanners. According to the book:

“Anything is possible. From investigating Lovecraftian horrors or haunted places where teens are being killed off one by one, to alien invasions, psychic experimentation, and ultraviolent suit-clad agents battling for the survival of humanity, the world of Conspiracy X should challenge, thrill, excite, and inspire players and Chroniclers alike.”

As a side note, Chronicler is the term for the game master in this system.

One of the major organizations in this game is Aegis. Aegis is the secret government organization which gathers research on aliens and paranormal events and battles to save the earth without the knowledge of common citizens like you and I. Not that there’s anything “common” about you and I, right? But I digress… Based on the cover art, I figured we’d see this trope. Sounds a lot like Men in Black, Delta Green (from Call of Cthulhu), and a number of other similar organizations for games of this genre.

The art for Conspiracy X is not bad. Not great, but not bad. There were many images of our secret agents and less of the baddies in the game. It might have been fun to see a better mix of artwork. I liken the art to that which you’d find in a typical small press black and white comic book. I will mention there is one image of female nudity in case that could be offensive to some.

The profession of your character runs a wide gamut but mostly positions in government or research; Conspiracy X even had NASA positions as professions. I thought this was interesting since I don’t see that too often in these types of games. All the usual professions are here: FBI, CIA, military, and law enforcement. Oh, and there were two types of criminal professions: violent and nonviolent.

Without getting too deep into details, there are pages and pages of qualities, drawbacks, skills, resources, locations where cells are located, weapons, equipment, and vehicles. Those of you who enjoy crunch in your game will love all the options available to create a very unique character in Conspiracy X. My personal gaming preference is for a more simple game but I have played Shadowrun. Conspiracy X reminds me a touch of Shadowrun if only for the vast options available when creating or outfitting a character.

There is one overriding mechanic when playing Conspiracy X: All actions are resolved using 1d10. You roll that d10 and add any appropriate character attribute or skill modifiers. The Chronicler then adds or subtracts setting or difficulty modifiers. If the final result is nine or higher then the action succeeds. The higher the final result the more successful the action attempted.

Most gamers want to know about several topics when exploring a new game. What’s it about? How easy or how hard are the rules? What kinds of opponents will I be battling? What do I have to do to kill something?! ?!?! This is how you fight and kill stuff in Conspiracy X:

1. You state what you intend to do during your turn.
2. The Chronicler determines who goes in what order.
3. Actions are taken whether they are attacks, defense, or non-combat actions.
4. Damage is determined.
5. After all characters and NPCs have taken their turn, you go back to #1.

One of the things I especially like in the combat section is how martial arts are described. Rather than saying, “Uh, I guess I’ll throw a punch….or uh, uh, maybe do one of those spinning kicks….” you can choose a very specific martial arts action. Some examples are head butts, knee strikes, stabbing hand, and sucker punch. You get the idea. Cool, huh?

The paranormal section of this game has a really interesting idea Apparently in the original version of Conspiracy X, a player could actually test his psychic ability and use the same result for his character in-game as a set of Zener cards in included. Oh, you know what these cards are even if you don’t recognize their official name. You know, the cards which have one of five symbols: star, wave, square, circle, and cross. Players can take this test in real life using the Zener cards and if they pick the right card, their character used their psychic ability successfully. Wow, I was blown away by this idea!

I won’t give away any spoilers by discussing the classified chapter of this book but suffice it to say it was interesting reading. The authors manage to weave real world events into conspiracies and pull it off very nicely. These ideas will set your brain afire when determining what setting and what adventure to send your characters into.

There are plenty of conspiracy games on the market. So why pick Conspiracy X over other games of this genre? For you crunchy game types, you’ll love all the options to create unique characters with unique combinations of skills and resources. For you story-driven gaming types, you’ll enjoy the option to explore the world you know (and the shadowy world you don’t) by reading all the conspiracy theories woven in with real historical events. No spoilers but I might mention Hitler, Roswell, Kennedy…. And if that weren’t enough, the use of the Unisystem engine will make Conspiracy X compatible with other Eden titles for even more play options! I should mention Conspiracy X is well supported by Eden Studios as well. On DriveThruRPG I counted three other source books for this version of Conspiracy X. You might even consider picking up the free Conspiracy X introductory game kit if you want to get a nice feel for the system.

There are plenty of conspiracy games on the market. So why pick Conspiracy X over other games of this genre? For you crunchy game types, you’ll love all the options to create unique characters with unique combinations of skills and resources. For you story-driven gaming types, you’ll enjoy the option to explore the world you know (and the shadowy world you don’t) by reading all the conspiracy theories woven in with real historical events.