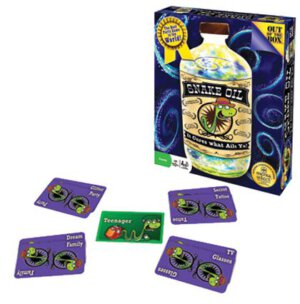 Publisher:  Out of the Box Publishing

From the Out Of the Box website: “In the Old West, sly snake oil salesmen had the special talent of getting even the most skeptical customer to buy the most dubious product. In Snake Oil, that’s exactly what the players get to do! One player draws a card and becomes the Customer while the other players each select two Word Cards from their hands to create a product to pitch to the Customer. Laughter erupts as each player attempts to persuade the Customer that their item is the best! The Customer picks their favorite item and that player is awarded the Customer Card. The player with the most Customer Cards wins!”

I received a copy of this game in the mail and was pleasantly surprised with the packaging. It was colorful and full of fun cartoon graphics. The box cover also noted this was “The Best Party Game in the World!” as well as a sticker which stated it was a Mensa Select National Competition Winner. Being the natural skeptic I am, I did an internet search and sure enough it did win the Mensa Select award in 2012. Ok, I’m in. I’m not sure I can prove or disprove it’s “The Best Party Game in the World”, but I’ll dig a little further into this game to find out for myself. 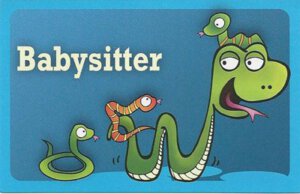 I opened the box and was greeted with quite a lot of cards as there are 324 purple word cards and 36 customer cards, which are blue on one side and green on the other. So if we do our math, this makes 72 different customers which you can play. I browsed some of the customer cards and loved each one had the cute snake mascot portrayed as a different persona. The babysitter snake had three baby snakes around it, the rapper snake was sporting bling and a backward facing ball cap, and the gangster snake was wearing a fedora and smoking a cigar. Out of the Box could have taken the easy way out and avoided the extra art, but they didn’t. The purple cards all have the same artwork though with our snake buddy and the word on one side and on the flip side is the snake oil bottle pictured on the front of the box. I’m ok with the repeated images because 324 individual artworks for each word card would have probably made the game more expensive. I kind of like the $19.99 price tag as it is.

So here are the rules: 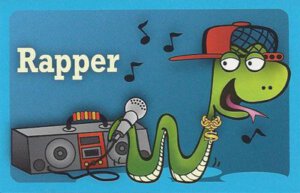 There are two variations to the rules: One is called “Fire When Ready”. In this variation, all the players start their pitch as soon as they select their two word cards; there are no turns and as soon as the first pitch is done, the next player jumps in and starts their pitch. The second variation is called “The More the Merrier”. In this version, players can start with eight or ten cards as opposed to the standard six cards.

We’ve probably all heard of the term “snake oil” but do we really know what it means?

OTB was nice enough to give us a history lesson along with their very fun game. This is taken from the game box:

“Real Snake Oil did exist! It was first introduced to the United States in the 1860’s by Chinese laborers working on the Transcontinental Railroad. After hard physical labor they would rub sore muscles with an ointment made from water snake oil and shared this ancient Chinese remedy with their American co-workers. Products containing water snake oil are still used today by some herbalists and a recent study found it contains more omega-3 fatty acids than the best forms of fish oil! As the years went by, snake oil was commercialized and in 1917, a sample of Clark Stanley’s Snake Oil Liniment was tested by the U.S. government and found to contain no actual snake oil. As a result of swindlers making false product claims and using misleading labels, the phrase ‘Snake Oil Salesman’ was born! Today, the term usually refers to used-car salesmen, politicians, or anyone who likes to stretch the truth just a little bit!” 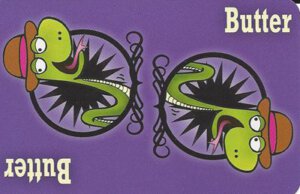 I really like this game. When I first looked at Snake Oil, it reminded me a little of Apples to Apples. My initial thoughts were Snake Oil might just be another variation of Apples to Apples. However, I was pleased to find out Snake Oil actually kicks up the fun quotient a notch from Apples to Apples by allowing so much individual creativity in the product pitches made to a customer. I also like the box and card art as they’re very fun and make you want to play this game. OTB did a great job of packaging Snake Oil.  Best of all the rules are very easy to understand; one can open this box, read the rules and start playing in ten minutes.

So are we to believe Snake Oil is “The Best Party Game in the World”? Again, I’m not sure anyone can prove or disprove this, but it sure is a heck of a lot of fun to play and very easy to learn!  I think your friends, family, and yourself will definitely enjoy this one.

So are we to believe Snake Oil is “The Best Party Game in the World”? Again, I’m not sure anyone can prove or disprove this, but it sure is a heck of a lot of fun to play and very easy to learn! I think your friends, family, and yourself will definitely enjoy this one.

Chris Ayala has been a gamer most of his life. The first game system (Odyssey) he played used translucent plastic overlays that stuck to the TV screen. From the NES to the Wii he hasn’t stopped enjoying the games. Three years ago while checking out some D&D books he decided to try one of those board games he always saw at the local game store. Settlers of Catan hooked him into this great hobby of board games. Chris will play any type of game, but has a soft spot for fantasy and Sci-Fi themes ...with railroads coming in a close second.