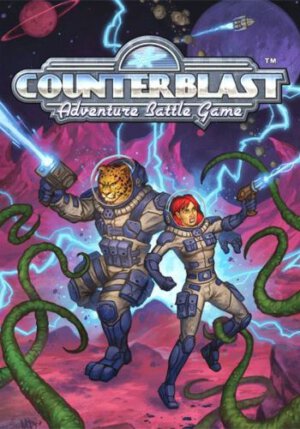 The mid portion of the Twentieth Century was a golden age of pulp science fiction. From Buck Rogers and Flash Gordon in the 1930s to the digest sized Astounding Science Fiction and Amazing Stories of the 1940s to the “bug eyed monster” flicks like This Island Earth and The Thing a certain style of SF was the norm. Once the 1960s arrived the New Wave of SF had arrived with a heaver focus on real science and future speculation and much less on zapping evil Venusians with light beams. Mention pulp science fiction and quickly bubble helmeted spacemen, flying saucers, ray guns, and aliens sporting light bulb shaped heads spring to mind and most SF fans will crack a smile thinking about those tales aimed at excitement and rousing adventure. Bombshell Miniatures’ Counterblast looks to bring this sort of two fisted, photon beam slinging pulp action from days of yore to the table top.

Counterblast is a skirmish level rule set and players can easily get into a game with only a handful of minis and a playing surface measuring three or four square feet. The system uses ten sided dice so you’ll need to have a handful of these as well as tape measures for everyone as Counterblast uses inches. Honestly, there isn’t a huge start-up cost to dip your toe into Counterblast (unlike plenty of other systems out there) and you can certainly field a crew of five of six minis on each side.

You won’t have to engage in much study of the rules since there are only a few core concepts you need to keep in mind: dice checks which include attribute rolls and skill rolls, moving and line of sight, and actions. I will mention the rules don’t seem to be laid out as intuitively as they could have been and I believe part of the problem is the small digest size of the book; a larger format would have packed more info on each page and it seems as if you flip through quite a lot to find a section which might answer a question. The layout and format creates other problems which I’ll address in a bit. 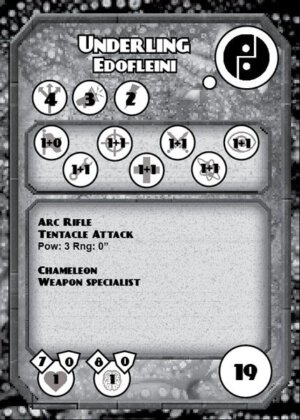 Five factions are included in the Counterblast rules including the Edofleini (the epitome of the creepy tentacled “bug eyed” aliens) bent on subjugating other species and planets; the Galactic Defense Force (sort of a throwback to E.E. Smith’s Lensmen or, to use a more contemporary example, The Green Lantern Corp) made up of conglomeration of alien and human races who look to protect the galaxy; the Lancers (mercs and privateers) another mix of humans and aliens more concerned with exploration, survival, and making a buck as opposed to being a military outfit; the Mekkus (machines operating through a collective A.I.) who are the bane of all living creatures; and the Neiran Empire (honestly, this faction sort of reminds me of Edgar Rice Burroughs’ Red Martians of Barsoom) which is a little more primitive than the other factions and grouped into various clans.

Each member of your crew will possess a card indicating various stats including their movement, weapons, experience level, skills, initiative, command ability, attributes (Body and Mind), as well as equipment and weapons. Crew members are further broken into Heroes and Cohorts. Factions also provide specific bonuses and special abilities unique to their crews. For example, you’ll be more likely to run across a crew member who has Psionic skills when playing as the Edofleini or Neiran Empire as opposed to the other factions. Plenty of archetypes are provided for each of the factions and there are rules included for players to create their own characters and Cohorts through a point system.

Once players have selected their crews and laid out the terrain they’ll select what sort of mission their crew in involved in (it’s possible the opposing forces have different missions) and they might be looking to assassinate a specific character or maybe even establish a base. Players will also designate a leader for their crew and that figure’s Command skill will impact the Initiative Phase each turn.

I’m not going to dive into the minutia of all the rules, or special rules, or unique situations which can arise during a game of Counterblast but here’s a rundown of how each turn plays out…

Initiative – Each player rolls a number of ten sided dice equal to their Leader’s Command level, looking to roll five or higher (the majority of dice you’ll roll in a game of Counterblast involve Target Numbers which you’ll be looking to hit) and whoever rolls the most successes wins the initiative.

Action Phase – Players will then alternate activating either individual crew members or groups of figures. This is an interesting aspect of the design as crew with Command skill can active a crew whose combined experience levels are equal to or less than the skill. As an example, a player can decide to use a crew member with a Command of three to activate three level one figures who will all take their actions at the same time. Each crew member can perform up to two actions but only one of them can be an attack.

Operational Action – Crew can use Psionics, Use an Item, Use a Skill, or Rally.

Crew Casualties – Any crew reduced to either zero Body or Mind is removed from the battlefield and their figure cost will count toward   the opponent’s victory points.

Upkeep Phase – If any crew has been lost, total the levels to determine if there’s any Panic. If the total levels lost is higher than the     Command of a crew member they’ll have to roll to see if they begin to skedaddle, have a harder time performing actions,  or if they stand their ground. Leaders can also aid in the skill check if they’re in range.

Just about everything going on in Counterblast will involve rolling those ten sided dice and meeting or exceeding Target Numbers. For example attacks (physical and mental) are resolved by rolling against the Defense of the target(s) of the attack. If successful, the crew member loses the number of damage from either Body or Mind indicated by the weapon or Psionic ability.

Once the players have finished an agreed upon number of turns Victory Points will be tallied based on the purchase cost of the models eliminated as well as any extra points the crew may have scored for fulfilling mission objectives. Various victory levels are reached by the difference between the two VP totals and, if you’re playing a campaign, the winner also scores Campaign Points to be used to improve their forces.

Overall I like the Counterblast rules and the core mechanics are light enough for those just joining the miniatures hobby to easily wrap their heads around everything while also including enough meat to keep longtime gamers entertained. You’ll really have some fun with these rules. Where I do have issues with the title is in the formatting and presentation. 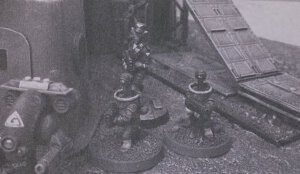 I understand Patrick Keith went with a digest sized rulebook as a nod to the pulp magazines of old but that leads to a major problem with reading the included faction crew member cards. They’re so small that it becomes a bit difficult to make out what skill icons each possess without actually putting your nose into the book; I know I’m not all that young anymore, although I haven’t had to pick up reading glasses yet, but I should be able to hold a copy of Counterblast at a normal reading distance and differentiate between the various skill icons. It doesn’t help that the number of skill dice and modifiers are printed on top of the icons as well. This problem could have been avoided by either going with a larger sized book or printing in color.

Keep in mind this is a review of the physical book so, of course, with the PDF you can always zoom in. Then again if you’re shelling out nearly $30 on a digest sized book it usually helps if you can read it without straining your eyes.

The grayscale print of Counterblast is my other big issue. While a color presentation would help as far as those crew member cards (“Oh, that icon is light blue and that means Leadership. That clicks! I don’t need to make out the icon. It’s light blue!”) it would also go a long way toward getting the old juices flowing to actually get involved in playing Counterblast.

I get the fact Bombshell didn’t have a lot of their own miniatures for the system available at the time the book went to print. I really do get it. Yet, in this day and age of slick high profile miniature game books out there, how can you not include color images to not only inspire gamers to purchase your minis but also give them an idea of paint schemes? Counterblast is filled with plenty of line artwork (more miss than hit honestly) but only a handful of images featuring miniatures and a few of those are so muddy it takes a moment or two to understand what the hell you’re looking at. As I’d mentioned, I understand the Bombshell line of reasoning was to present Counterblast like a pulp magazine.

In my opinion if it came down to either giving a nostalgic nod to the pulps of old or presenting a rule book which was clear, concise, and showcased the visual splendor of playing miniatures – which is why a great many of us play with minis – I’d have obviously gone with the latter since functionality should be the key. Plus, Patrick Keith has sculpted some awesome figures so why not show them off in all their glory?

It’s saying something about the actual rules of Counterblast that I’m scoring the book as high as I am; I really think people who aren’t of the “I only play every game as if it’s a tournament’ mind set will have a lot of fun with them. On the flip side, hate is a strong word so I’ll say I strongly dislike the formatting of the physical book and feel it’s detrimental to the overall product. Counterblast could have been one of my Solid Buys or nearly a Must Buy but in the end I can only say it’s good and worth a look if you have an interest in space opera-ish pulp SF.

…and if you buy the physical book you better own a magnifying glass.

TGG REVIEW
7.5 TGG SCORE
0 VISITORS' SCORE (0 votes)
Summary
It’s saying something about the actual rules of Counterblast that I’m scoring the book as high as I am; I really think people who aren’t of the “I only play every game as if it’s a tournament’ mind set will have a lot of fun with them.
REVIEW SCORE
What people say... Leave your rating
Sort by:

Very interested to hear your comments about the layout of the book and cards – especially as I’m in the middle of a series of blog posts about “How To Design A Rulebook”!

It’s a real shame because I like the rules quite a bit, and I’m sure the PDF is much easier to read, but I have to present a review on the book since that’s what I received.