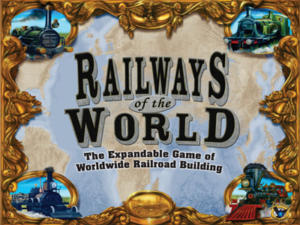 Game Name: Railways of the World

I know people must be thinking, “Jeff nearly five months before you tackle a railroad game and now two reviews in a couple of weeks? What’s up?” I know it’s pretty crazy but what can I say? I suppose I could start off by pointing out I’m probably not the biggest 18xx game fan out there. It’s not as if I have an issue with the theme (I like trains well enough, I suppose, if I’m not stuck forever waiting for one at a crossing) but most railroading games I’ve run across have left me pretty dry. Of course, as my previous review showed, I really do enjoy Baltimore and Ohio so that was a first. Now I can add another title – also from Eagle Games – to my list of games to break out whenever my gaming gang is in the mood for railway action. 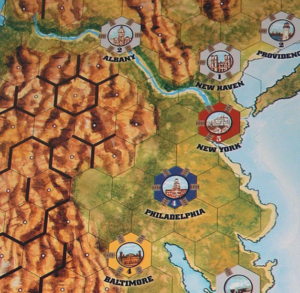 Railways of the World is a relatively easy game to pick up and learn right out of the box. Maybe not on the same level of Ticket to Ride but, still, the learning curve t’ain’t too steep on this one. If anyone can grasp the concept of making money and setting up If it came down to it I suppose if I had a choice of teaching someone RotW or T2R I believe I’d have to go with the former if I had folks sitting at the table with any sort of gaming experience. For me, personally, T2R is a bit too simple and has way too much luck involved for my taste. Draw cards, collect sets, draw cards, collect sets, and so on. I’m not saying that T2R isn’t fun in its own way – it is a nice gateway game to introduce people to the theme and the hobby – but you don’t really get the feeling of being a business mogul building a railroad empire.

If a player can understand simply concepts of making money and putting together rail lines they’ll be able to wrap their head around this game.

Each player portrays a Rail Baron (or should I say Robber Baron?) and randomly drawn objective cards give each tycoon a unique feel every time you play. These objectives can lead to additional points scored to help drive you along to victory. Players will focus on establishing links between cities in order to deliver goods, invest in upgrading their rolling stock to deliver those goods further, and increase railroad profits. Interestingly enough all players begin without a dime to their name so they’ll have to sell shares in their fledgling railroad in order to generate revenue to get started. It goes without saying that early in the game everyone will be operating in the red and there’s a real sense of accomplishment once you start seeing a profit.

The economics of the game are simple enough and fairly abstract. This isn’t a game like B&O where you need to have a calculator on hand yet the system makes sense and fits very nicely into the way the game plays. There’s always something that you can be doing with your company that will cost you money but increase your profits in the long run. Another important feature is that you can make a mistake from time to time with the knowledge that one misstep isn’t going to completely doom your game.

Each turn is broken down into three phases: The Auction for first player, Player actions, and Income and dividends. 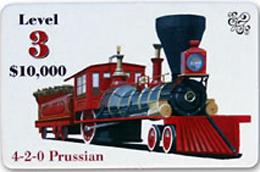 The auction phase is exactly as it sounds as each player bids cash to see who will be first. I’ll have to admit I’m never big on bidding to see who starts off in any game but it isn’t a huge deal here.

Next are player actions and each turn includes three rounds of player actions with the first player beginning the actions followed by each player clockwise around the table. Each player performs one action and actions rotate until each player has completed their rounds. The actions include building track, urbanizing cities, upgrading engines, delivering one goods cube, or taking one railroad operations card.

Finally players collect their income and pay off any debts they have on their railroad bonds.

Each city on the board supplies certain colored goods cube and demand a certain color of goods in return. Obviously players will want to connect these centers of supply and demand and the game ends once a certain number of cities no longer have any goods to ship; these are marked with an Empty City marker once the goods are exhausted.

The game is almost pure strategy and there’s quite a lot of it. Every turn you have a lot on your plate to mull over. Not that it will take a long time for you to decide what to do in your turn but you have to come up with good short and long term goals if you want to win. Luckily, the economics in RotW are somewhat forgiving so if you use poor strategy you’re more likely to lose, but you won’t be totally wiped out of the game.

The base game includes both Railways of the Eastern U.S. (which is great for larger number of players) as well as Railways of Mexico (which works wonderfully for 2-3 players) and each expansion has its own flavor and feel; the railway barons and Operation Cards are different for each. Other expansions available are Europe, England and Wales, and the Western U.S. – which was recently released.

One downside is the RotW lasts much longer the more players you have. You should plan a four to six player game to last in upwards of three hours or more. I can say that the time moves along quickly since you don’t have much downtime since the action phase moves along at a steady clip with each player taking one action in turn.

All in all, RotW is a great game and you really get the feeling of being in control of a railroad. The components are excellent and the inclusion of the Objective Cards as well as Operation Cards (which will vary based on what expansion you’re playing) adds an interesting narrative to play that you might not find in other 18xx games. If you already own Railroad Tycoon you’ll want to take a pass since this is effectively the same game. Yet, if you can’t claim that game in your collection, you’ll have a hard time finding a much better title to fix your 18xx railroading jones.

TGG REVIEW
9.2 TGG SCORE
0 VISITORS' SCORE (0 votes)
Summary
If you're looking for a 18xx title which lays on the strategy and foregoes the luck factor you can't go wrong with picking up Railways of the World.
REVIEW SCORE
What people say... Leave your rating
Sort by: