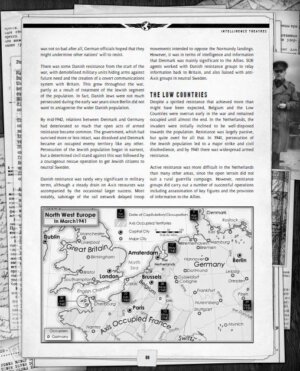 A large portion of the Keeper section is also devoted to theater of operations intelligence. There’s loads of great info for the Keeper to utilize in putting together unique missions and campaigns anywhere from Norway to North Africa. Each theater description includes a handful of adventure nuggets to be mined as well. I especially like this section as there’s a good deal of historical background most gamers won’t be familiar with and the various cults, and their activities, are given a good amount of detail. I will mention the Mythos isn’t covered in too much detail but that’s probably as it should be since too many campaign settings feel as if you can’t swing a dead familiar without hitting a Deep One or Byakhee.

Historical NPCs are also covered although it’s not an extensive who’s who there are a good number of real life individuals the characters could conceivably encounter, due to working with the SOE, in the course of a campaign. It’s possible the characters could work with Ian Fleming and his 30 Assault unit or “Mad” Jack Churchill – broadsword and all.

The Keeper section finishes up with listings of equipment and rather than just tossing out a bunch of game stats there’s also plenty of info as to how easily available any of the gear may be. Not only will players have to deal with wartime shortages but rationing as well so, depending on what theater the team may be operating in, even the most mundane items could be difficult to obtain.

American gamers might be taken aback by how little print is devoted to the U.S. throughout WWC but given the period covered by the sourcebook (approximately from the Fall of France in 1940 to the invasion of the Soviet Union in 1941) this is understandable and there are rules provided for playing as a Yank. I’m sure the good old U.S. of A. will be covered in later supplemental material.

World War Cthulhu concludes with a good sized campaign entitled “The God in the Woods.” It’s a pretty good campaign and there’s plenty to mull over to keep the players occupied a long time. The NPCs are especially well presented with info the players should easily learn about each, what they might eventually learn about the NPC, and the true nature and goal of each NPC and how that plays out within the campaign. The campaign is a hell of a lot better than many you’d find in the average sourcebook (or core book for that matter) although I do have a couple of small issues.

Personally, I always like the more traditional Call of Cthulhu presentation of an adventure or campaign; begin with an overview of the adventure which spells out exactly what’s going on and then move onto the “scenes” within the adventure as well as the breakdown of the NPCs. The God in the Woods provides all the info about the setting (NPCs, areas, campaign nuggets, and so on) and then gets into the overall flow of events at the end. This leads to a lot of page references further into the campaign and by the time you’ve gotten to the campaign rundown you’ve forgotten who some of the NPCs are and where places are located. Not a huge critique, since the campaign is a good one, but the Keeper is going to be flipping back and forth through the book a ton while preparing for a game session. 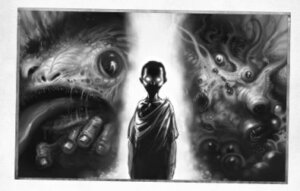 My last bone to pick with The God in the Woods is the fact the “big baddie” may or may not be a Great Old One; the final decision is up to the Keeper to decide. For a sourcebook carrying Cthulhu in the title WWC should have provided a campaign more tightly woven into Lovecraft’s mythos. It’s a design decision I understand though and I can’t get too bent out of shape about it since the Keeper can easily build the campaign however they please.

Visitors know I’m a fan of Cubicle 7 and much of what they release for the RPG market. With World War Cthulhu: The Darkest Hour you can tell Dominic McDowall-Thomas and his team surely went the extra mile to get this sourcebook right.  By “getting it right” I mean WWC aims at the traditional CofC style of adventures where danger lurks at every turn and one misstep can lead to disaster. I also appreciate the fact Cubicle 7 treats the historical background with a lot of respect and doesn’t mince words when it comes to Axis atrocities and the Mythos and never the twain shall meet. If you haven’t listened to my Origins 2014 interview with Dominic McDowall-Thomas, check it out because we discuss WWC in quite a bit of detail.

Any gamer interested in roleplaying Call of Cthulhu during World War II needs to have World War Cthulhu: The Darkest Hour in their collection. The sourcebook is a must buy overall but for those who prefer more dark and gritty and less Indiana Jones the book is truly invaluable. Add to this the high quality of WWC’s presentation and you’ll easily see why I’m giving the book a truly great score. I’m eagerly anticipating the next release in the series, World War Cthulhu: Europe Ablaze!

Any gamer interested in roleplaying Call of Cthulhu during World War II needs to have World War Cthulhu: The Darkest Hour in their collection. The sourcebook is a must buy overall but for those who prefer more dark and gritty and less Indiana Jones the book is truly invaluable.

Jan 15, 2021
The Latest Episode of TGG Dispatch
Join the Gang