Howdy gang! Unfortunately, it isn’t looking very promising that I’ll be able to get the team together for a live gaming stream to raise money for the Extra Life game day this November 5th. I might just do something solo for a few hours but as for a big 12 hour marathon? Just not looking like we can put it together. Regardless, I do once again want to get a bunch of lightly used games into good homes while also raising money for Extra Life. Last year I put together an auction but this year I’m going to roll out a straight up, first come – first served sale. No waiting to find out if you’re the winning bidder! 50% of all purchases (after PayPal gateway fees) will be donated to Extra Life. I’ll make it as easy as possible to take part too!

Simply email me at [email protected] with the items you’d like to purchase as well as a mailing address so I can calculate shipping. Payments will be processed by PayPal. I can ship either USPS ground or USPS Priority Mail (Strangely enough, there usually isn’t much of a difference in cost between the two) and will ship within three business days of receiving your payment. The sale will run through November 2nd which will leave plenty of time to put together the donation for the November 5th Game Day.

Romance of the Perilous Land – $10

Legends of Andor: The Liberation of Rietburg – $9

Cult of the Deep Kickstarter preview (Box cover has rip) – $10

Empyreal: Spells and Steam (This is a rather large box) – $30

City of the Big Shoulders and Burden of Destiny expansion – $40

Before the Earth Explodes – $5 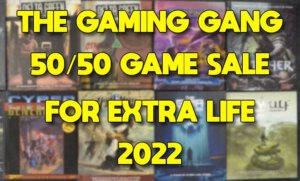 Score tons of great games, at small prices, and help sick kids too with our 50/50 sale to benefit Extra Life.
0
Awful