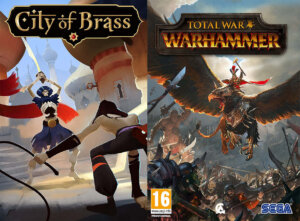 It’s Thursday so that means free PC gaming goodness from the Epic Games store. This week brings both City of Brass, from Uppercut Games, and Total War: WARHAMMER, from Creative Assembly and SEGA, absolutely free. These two freebies will be available through around 10am CT on April 6th.

Become a daring thief in City of Brass, a first-person action adventure from senior BioShock developers. Armed with scimitar and a versatile whip, you’ll lash and slash, bait and trap your way to the heart of an opulent, Arabian Nights-themed metropolis – or face certain death as time runs out.

Hundreds of hours of gameplay await you at the dawn of a new era. Total War: WARHAMMER brings to life a world of legendary heroes, towering monsters, flying creatures, storms of magical power and regiments of nightmarish warriors.

Embark on campaigns of conquest as the valiant men of the Empire, the vengeful Dwarfs, the murderous Vampire Counts and the brutal Orcs and Goblins of the Greenskin tribes. Each Race is wholly different with its own unique characters, campaign mechanics, battlefield units and play style.