I can remember two very lucky moments in gaming. The first was when I rolled two natural twenties in a row in a game of Gamma World that let me bluff my way into a quonset hut. That I managed to pull off the improbable feat sent my GM into a deep funk. I think I was denied any useful treasure for several sessions.

The second bit of luck came in 1991. I found a guy, Billy Stevens, selling carrom boards in Durham, NC (the picture here is by Jonny5 on BGG). I can’t remember now how I initially made contact with him, but I attended a carrom get-together that he hosted every week at a pub not far from the Durham Bulls’ baseball field. I became deeply enamored of the game, but I was also working in a small video rental shop, and my hours fluctuated wildly, so I was only able to attend the game days sporadically.

But we’re not to the lucky part yet.

That spring a lot of buzz started to develop around a project put together by Jane’s Addiction’s frontman, Perry Farrell. A concert/festival was going to go on tour, an event he was calling Lollapalooza. The project was making a stop at the new Walnut Creek on the outskirts of Raleigh, and my friends immediately bought tickets when they went on sale. I abstained. The job, you know? And then the day before the show, Billy Stevens walks into the store and asks if I’d like to go to Lollapalooza. He had rented space for displaying and selling carrom boards, and he needed people to staff the booth. My manager overheard the conversation and insisted that I go. So, early the next morning, I drove to Billy’s house, packed up carrom boards, and headed with a few of his friends to Lollapalooza. I spent the day drinking beer we’d smuggled in (to avoid the concession prices), playing carrom, and wandering over to the stage to watch the acts.

I mention these stories not to focus so much on luck—that bane of gamers—but to set up my love of flicking games and other table-top dexterity games (we’ll skip over my deep and abiding interest in pool). Because of this interest, my wife pre-ordered a Mayday Games Crokinole board for me in order to celebrate my recent graduation (photo of a Mayday board by WhiteKnight85). I’ve been flicking the little disks around daily since it was delivered. (As an aside, Mayday seems to have some quality control issues with this first round of boards, but mine arrived unscathed and in good shape.) And I want to point out that games are not your life. It makes me a little uneasy to say that, but it’s true. But it’s true in the way that photographs are not your life, much as Kodak would love to advertise to you the exact opposite claim. Like photos, though, you can construct snapshots of your life through games, while remembering that it’s important to focus on the life and the stories.

And if you’re in town, stop by and flick some disks. 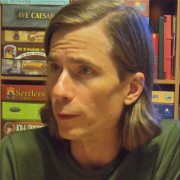 Alright, I'm afraid I am just going to expose my ignorance to the readership and ask how do you play Crokinole? Those two photos look like they are lovely boards and I was curious as to the size on them. Oh, sure James, I could just surf on over to Wikipedia to learn about it but I was wondering, as a devoted fan of carrom or Crokinole, how would you explain the games to someone who was completely unfamiliar to the pastime?

OK…but wait, I have a Crokinole review up! Over here: http://thegaminggang.com/2010/09/flickin-frackin-…
And carrom's fairly similar, but you have pockets in corners. And a heavier, well, sort of like a cue disk that you knock the other disks around with.

What other flicking games do you like? My family really enjoys Carabande (Pitch Car) and Elk Fest. What are your thoughts on those games?

I also know that the Mayday boards are substantially cheaper than most Crokinole boards. Is the surface smooth? Do you notice any difference on that board versus the more expensive ones?

I'm dying to play Pitch Car! I've heard some reviews that make me a little hesitant about forking over the cash until I can play a game or two. And I have had some great times playing Elk Fest. My nephews think it's about the most fun thing ever. I'd also like a crack at Subbuteo. Any other titles you're looking to play?

The Mayday boards are a great value, particularly if you're in the US. If you're in Canada, I think I'd suggest one of the hand-crafted boards, but the shipping to the States pretty much doubles the price of those boards. The differences are mostly in the details, and, as I wrote in the piece, in the quality control. I'll sum up with this: I believe I'll get my money out of the Mayday board, but I wouldn't be surprised to have to replace it. With the handmade boards, I'd expect you could kill zombies with it and still have it in good enough shape to hand to down to your children. And then to their children.

Definitely give Pitch Car a try. It is a great game.

I too love some flicking, I have a mayday crokinole board, but I was unhappy with the finish on my board and may end up getting a new board. I also have pitch car mini. I find it a bit more reasonable concerning table space required. Another fun flicking game I have is subbuteo and it is very fun, if you like billiards and soccer than subbuteo should really be on your must play list, i don’t like soccer and I still have a blast! There is another game I’ve played that reminded me of pitch car, it is called Bisikle, rather than discs it uses a ball that is peculiarly weighted. it is a much more affordable alternative to pitch car, and I personally think that the initial amount of track the game comes with lends much more options for track layout than pitch car does.

Damon, I definitely have my eye on subbuteo. I’ve even gone to YouTube to see some of the subbuteo videos (worth watching!). Bisikle has also been on my radar. The weighted ball seems like a fun addition to the flicking genre. I’d love to get some time in playing that game, too.

James, Have you checked a site called Zelosport. they have a great line of sports flicking games! Their soccer game is way cheaper than Subbuteo and as all the feel of a soccer match. Their baseball game is great! It won 2007 Toy of the Year for FamilyFun Magazine. It is a very interactive 2 player game. The company’s emphasis lately has been there finger football game. They pushing to have a National Tournament with leagues in each state to compete in. Plus they have great videos at there site explaining how to play each game. http://WWW.Zelosport.com , check it out. I think you will be pleased.
P.S. PitchCar is a fun game. Just make sure your guardrails don’t fall off or your car will go flying off the track 🙂

Jason,
Those look like a lot of fun. And good for Zelosport to find a mechanic–and playing piece–that works across all the games. How are the boards?
James