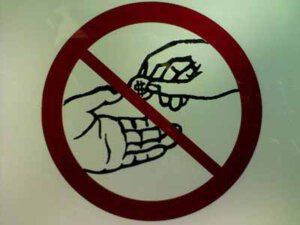 People who regularly visit TGG, or listen to our show, know that I tend to be very forthcoming with my opinions; I take the “views” part of news, views, and reviews to heart. That said I’ve noticed a disturbing trend in the gaming community as of late and I’d be remiss if I didn’t take a few minutes to write about it. What is beginning to trend is a thought that those who visit gaming websites are under some sort of obligation to financially support those sites. Obviously, that line of thinking comes from the people running the websites in question.

Of course I’m not talking about some innocent PayPal “donate” button on a website or a link to make your online gaming purchases through a retailer whereas your favorite reviewers get a bit of commission from that retailer toward free games. Both of those avenues for a trickle of revenue, along with Google Adsense, normally are what you’ll run across on a gaming site. None of that is very intrusive to the visitor and these are things you’ve been seeing for years.

Running a website isn’t free (unless you’re simply being hosted on Wordpress or Blogger – then it is!) and we all know that getting games isn’t free (unless you’re receiving review copies – then it is!) or at least in the real sense of what comes at a price. I’ll be honest by saying even with the funds required to maintain a website and podcast the cost is rather low if you compare it to many other pursuits – hanging out in a bar chasing skirts immediately comes to mind – but the time investment can be a killer. Therein lays two questions that anyone involved in covering the gaming scene has to ask themselves: What is my time worth and why am I doing this in the first place?

Those are two questions I can’t answer for anyone else out there but Elliott and I. The short answer for us is that TGG got started because we believed we could bring something a bit different to the table due to our personalities and combined decades of gaming experiences. We both had a little free time between the two of us so we felt it would be a nice way to invest our time. The longer answer is that I had some experience running websites and recording podcasts while, at the same time, Elliott was getting his kids more and more involved in the hobby so we thought this would be a great way for the two of us to really stay in touch while 1800 miles or so apart. Our thoughts at the time, and to this day, had nothing to do with making money from the endeavor. The Gaming Gang was launched as a lark more than anything else. That’s not to say that our initial approach wasn’t serious or professional but we thought all in all if we got to the point where maybe a hundred people a day showed up we’d be ecstatic.

Which brings me to my somewhat of a rant.

I find it disturbing that there are those in the “gaming media” who seem to think covering games is a sort of get rich quick scheme somehow. That’s bad enough in itself, I suppose, but wouldn’t have led me to write this if we were only talking about paid advertisers or generating revenue from Google ads. Heck, webmasters the world over look to do that! What bothers me to no end though is those who want to pester you into footing their bill, usually under the guise of a charitable contribution.

What really got me rolling on this was the announcement that The Spiel had launched a Kickstarter campaign to finance a trip to this year’s Essen. I’ll be upfront and say that I’ve never been a fan of The Spiel for a multitude of reasons: I find the show to be rather bland, not to mention that I can’t tell one host’s voice from the other nor do I believe either comes across as very knowledgeable outside of shilling what is one “awesome” game after another. Add to the fact neither host seems to have any life until they go into one of their many pledge drives or begin to carry on about what their charity has been up to – always followed by yet another plea for donations; I’ve experienced fewer program interruptions during a PBS pledge drive than in a single episode of The Spiel.

Yet, The Spiel is a popular show and I don’t begrudge them that. I just don’t find them to be my cup of tea in the same vein as our podcast certainly isn’t everyone’s cup of java either. The reality is what irks me is The Spiel wants to have listeners pick up the tab to finance their ambitions, plain and simple. Yes, I understand that they have a non-profit foundation and all but I have to wonder what that’s all about since they have no links to their 501(c)3 bylaws to my knowledge. I’m always a little leery of nonprofits who don’t disclose their mission statement and bylaws to the public. And we won’t even discuss public disclosure of spending…

And now these guys have a Kickstarter project so other people can pay for their trip to Germany? Seriously? I don’t see any mention of The Spiel Foundation anywhere on that. Will those donated funds be counted toward the non-profit? Are these donation dollars also tax exempt? Or are these guys simply pleading for you to shell out for an “awesome” trip for themselves to Essen?

Like many things lately involving Kickstarter, this is something that is going to set a less than desirable precedent; if the Spiel reaches their funding goal that means just about any Tom, Dick, or Mary will take to Kickstarter to roll out projects to send them to conventions worldwide. Or, better yet ask you to fund a start up website, or recording equipment for a podcast, or video cameras, or just about anything under the sun. Hell, why should Elliott and I have to pay for anything relating to The Gaming Gang? Shouldn’t we just ask you to pick up the tab?

Which is what led to this whole thought process in this post. I received a couple of emails asking if Elliott and I were considering launching something on Kickstarter so we could go to Essen. I actually read those emails in horror wondering what we’d ever done to put that thought in someone’s mind. Here we are in our second year and we’ve never asked our visitors for anything more than to spread the word or maybe buy a shirt. We don’t even have Google ads on the site because we want to offer the best value to our advertisers – who, by the way pay for the upkeep of the site and helped us to make the trip to Origins and Gen Con (not to mention other shows in our own backyards) – and someone would think we’d even consider asking the public to finance anything we did?

Like I started the post… A disturbing trend; since other people out there covering games have no qualms about what amounts to public begging, I suppose Elliott and Jeff wouldn’t either?

Long time visitors already know Elliott and I are old school gamers but we’re also old school in a lot of other ways too. You pick up the tab when you go out on a date. You put in a real day’s work for a real day’s pay. You back your friends up no matter what. And you never look for a handout or a free ride. EVER!

It comes down to not only having appreciation and respect for the folks who take time out to come and visit the site or listen to the show, be it once or all the time, but also looking at these same folks as friends – not easy marks to squeeze a few bucks from. For me, it also has to do with having self-respect and doing your best to provide an entertaining momentary distraction from the troubles in our day to day lives. If we can’t pull that off without putting our hand out, then we have no business doing this.

Some would argue we have no business doing this regardless, but suffice to say we’ll never ask you to foot the bill.

What Happened to Jeff?

Thirteen Roleplaying Games Perfect for Halloween …and All the Rest of the Year Too!