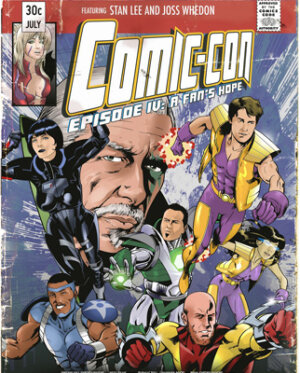 Now showing in a few select theaters, and available as Video On Demand is Comic-Con Episode IV: A Fan’s Hope, a film by Morgan Spurlock.

Have you ever imagined a place where Vulcans and vampires get along? Where wizards and wookies can be themselves? Welcome to Comic-Con San Diego. What started as a fringe comic book convention for 500 fans has grown into the pop culture event of the year that influences every form of entertainment, now attended by over 140,000 strong.

COMIC-CON EPISODE IV: A FAN’S HOPE- a film by Morgan Spurlock explores this amazing cultural phenomenon by following the lives of five attendees as they descend upon the ultimate geek mecca at San Diego Comic-Con 2010:

One on one interviews with Comic-Con veterans who have turned their passions into professions include Stan Lee, Joss Whedon, Frank Miller, Kevin Smith, Matt Groening, Seth Rogen, Eli Roth and others are shared throughout the film along with up close and up front coverage of all the panels, parades, photos, costumes, crowds and camaraderie that make up one of the largest fan gatherings in the U.S.

Make sure to check out the Morgan Spurlock link, as he has a behind the scenes look at the shooting of the movie on his website. Here is the official trailer.