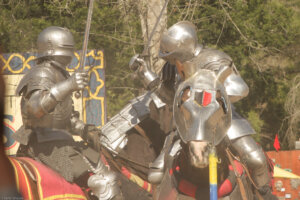 The official press from The Sherwood Forest Faire:

“This season festival-goers will be transported to Sherwood Forest in 1190. Richard the Lion-hearted has recently succeeded his father, Henry II, as King of England. He has spent most of his reign in the Holy Lands recovering Jerusalem and the Holy Lands recently conquered by the Saracens under their General Saladin. After a brief homecoming last year, in 1189, good King Richard is away to the holy lands again, and England has been left for the miserly barons and earls to rule in his absence. Although King Richard promoted the old Sheriff of Nottingham to the front lines of his crusade, there is a new Sheriff in the county of Nottinghamshire. Once a fair-handed lawman, Sheriff de Greasby has adopted an interpretation of the law that is just as unfair and unscrupulous as his predecessor’s. He is demanding even higher taxes, and plans to make sure they are paid in silver or flesh. But Robin Hood’s band of “outlaws” remains united to right the wrongs of the Sheriff and his deputies—and to assure the rights of the common folk are upheld. Their task will not be easy, as the new Sheriff has hired the evil Sir Guy of Gisbourne to bring him Robin Hood’s head. Come watch the action unfold as Sherwood’s merry folk battle with the Sheriff and his henchmen!”

If you like fantasy roleplaying games, there’s a strong chance you might also attend or want to attend one or more of the various renaissance fairs that come to your town. The big one here in Texas is the Texas Renaissance Festival (TRF) held every fall in Plantersville, Texas. This year, I decided to check out the other ones in my area. A couple of weekends ago, I visited the Sherwood Forest Faire in McDade, Texas. 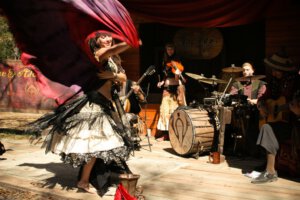 I wasn’t sure what to expect as I got off the main highway and onto an unpaved and very rocky 1 mile back road to the fair. There were a number of cars ahead of me and a few behind so I figured I was on the right track. My only point of comparison to this point was the TRF and I quickly realized Sherwood was significantly smaller. I have to say I was a bit disappointed at the onset but thought I’d give it a chance. It’s kind of like driving a big SUV and downgrading to a nice but very much smaller car. They both have their charms but you initially miss driving the SUV.

As we walked in, the Saturday crowd was significantly smaller. I think even the word “crowd” is not the right descriptor. Medium sized gathering is probably more accurate. On the positive side, less people meant less standing in line for food and drink and more freedom to move around the shops.

We headed over to the Falconry Stage and watched “Sky Kings: Birds of Prey”. It was amazing to watch hawks, owls, and even a vulture swoop around us on command. These birds were close. One owl was flying so low that its wings brushed against the hair of my daughter’s friend. My picture isn’t quite in focus, but you can tell how low these birds were flying into the audience. Very entertaining! From there, we headed over to the Elven Hill Stage and watched one of my favorite festival artists: Wine and Alchemy. Their combination of costumes, world music, belly dancing, and general showmanship kept the audience delightfully enchanted. I certainly miss the days of E Muzeki which was the band that broke up and splintered into Wine and Alchemy and Circa Paleo. 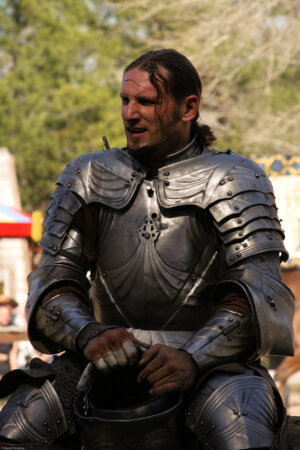 The next show we saw definitely had an adult flavor.  It was called the Combat Tournament of Sherwood. It was basically wrestling-style staged combat between four entertainers. It was peppered with lots of sexual innuendo and is probably fine for adults but use your best judgment if you take your kids. I’ve come to understand that these festivals have an underlying sexual tone and you just have to use your discretion when picking shows if you have minors with you or people that are easily offended.

And what would a renaissance festival be if you didn’t attend a joust. So we made sure to wind up the day at the Joust Arena as we watched two brave and gallant knights beat each other senseless while riding horses and wearing full armor. It was good clean fun and there was lots of crowd participation as both sides of the arena cheered on their appointed champion and booed the other side’s unworthy knight. I’ve seen about half a dozen jousts at TRF and this one was more entertaining for some reason. Maybe it was the very charming and funny host who used Old English to great effect and couldn’t help laughing at his own sarcastic jokes.

There were lots and lots of other events that we didn’t see and it would probably take several weekends to take it all in. The entertainment starts at 10 a.m. and ends at dusk. Other featured shows we missed were bagpipe players, dancers, puppet shows, chess matches with huge chess pieces, jesters, a parade, the requisite mud show, various other musicians, and many more. 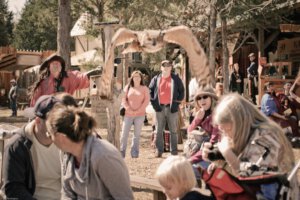 In addition to the entertainment, there are over 150 shops, a small selection of food vendors, and even a wine tasting event. The shops were the kind traditionally found at these festivals:  period inspired clothing and trinkets, armor and weapon merchants, jewelry, leather goods, pottery, and a host of other fine artists. Like most guys, I tend to be attracted to the armor and weapons and it seems like the armor was a whole lot less expensive than the prices found at the TRF. Maybe the TRF prices go up there because the chances of selling an overpriced sword or helmet are higher with the larger (and more intoxicated) crowds. Who knows? I was a bit disappointed that there didn’t seem to be as many food vendors. But I also understand that you have to have the crowds to support a greater variety of food vendors. It wouldn’t be profitable to have more vendors than the number of available patrons to support them.

Overall, I was quite pleased with the Sherwood Forest Faire. Sure, it’s the wee baby brother of the Texas Renaissance Festival but it had its own charms and I will be going back next year. The entertainers and vendors were very friendly and went the extra mile to make you feel welcome there. The only downside was that darned rocky, unpaved road. It was a bone jarring mile ride to get in and to exit.

Sherwood Forest Faire is in its fourth year and runs through March 31, 3013 (10 a.m. to dusk, rain or shine) so don’t delay if you plan on attending!