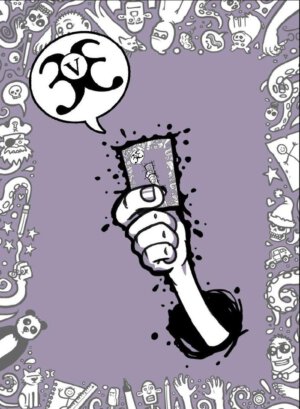 Up right now on Kickstarter is 3v3: The Commissioned Comic Card Game, a project by Darren J. Gendron.

Darren has this to say about the game:

Obsidian Abnormal is the creator of Commissioned, a madcap webcomic with zombies, gnomes, ninjas, cats and nerds. So when Obsidian and I decided to create a game about his comic, we knew we wanted to make it a fighting game.
3v3: Commissioned is a unique spin on deck-building. We stripped away a lot of the trappings of other card games – the resource row, keeping cards in your hand, or hiding cards face-down on a battlefield. We went down to the three basic elements of battling card games – attack, defense, and special abilities.
For each hand of 3v3, you draw three cards. Then you use one card for your attack, another for your defense, and the third card for your special ability. Both sides attack simultaneously in this fast-paced game.
And with 350 cards slated for our initial release, there’s plenty of strategy in selecting the perfect 30-card deck. There’s the zombies, who gradually grow into larger and larger threat with the more of them out. There’s the ninjas, a powder-keg of attack and defense that’s totally capable of blowing up in your face with a Flip Out. There’s the Perverts, who make you feel dirty for hitting them.
There is a lot more information at Kickstarter. The project will run through September 18th and they are already halfway to their goal. Here is a peek at their video:
Tags
3v3 Comissioned Comic Darren J. Gendron Kickstarter Obsidian Abnormal Tabletop Gaming Videos