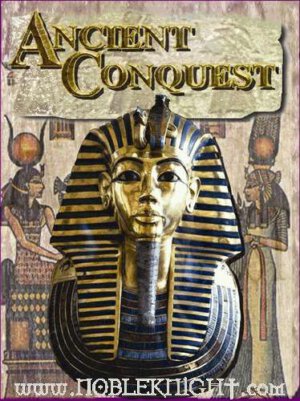 Ancient Conquest is a wargame for 1-4 players set in the Ancient Near East.  The game was originally published in 1975.  Yes before cable, before video games, before cell phones there were still wargames.  I ran across this while browsing through Noble Knight’s games and was drawn in by the picture of King Tut on the cover.  Many of you I am sure will not remember the lines around the block of people waiting to see the treasures of King Tutankahmun’s tomb way back when.

This is an all new edition just released and so I sought out the publisher on the “Internet” as I like to call it.  Unfortunately, Excalibre Games is still back in 1975 because they do not have a website.

However, the game has intrigued me.  Here is the info I was able to find:

Ancient Conquest is a classic and highly rated multiplayer game covering at a grand strategic level the rise and fall of empires and peoples in the ancient near east. Roughly covering the period from the New Kingdom of Egypt to the Age of Four Kingdoms (chronologically from 1500 BC to 600 BC). The game combines the diplomacy and political objectives of the involved peoples and empires of this period with a fast moving and playable combat system. Ancient Assyria, Egypt, Babylon and the Hittites are all included, as well as numerous other powers.

Historically, a highly accurate game, while yet designed with elegantly simple game mechanics; Ancient Conquest is sure to be a favorite. A must for any game enthusiast.