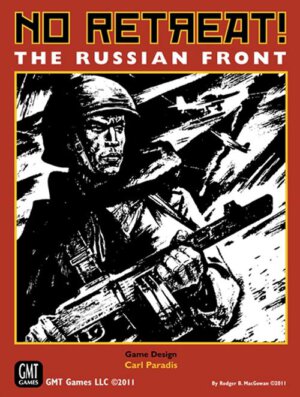 No Retreat: The Russian Front from GMT Games. Plus a congrats out to Victory Point Games, as this game started originally as a VPG Game in 2008, and was given the deluxe treatment by GMT in 2011.

No Retreat: The Russian Front is a new deluxe edition of the two-player Victory Point Games 2008 CSR Award Nominee wargame that retells the story of the titanic struggle between the invading armies of Nazi Germany versus Communist Russia during WW2 at a player-friendly and manageable level of scope and difficulty. This edition combines both the original game and its two extensions (Na Berlin ! and No Surrender!) using deluxe components of “Twillight Struggle Deluxe Edition” quality. With only 50 Army/Front sized counters for the Tournament game, and 70 for the whole campaign, and with very low stacking, it’s a quick-playing yet realistic affair that favors the strategic and offensive-minded player.

Each turn is alight with intriguing on-board challenges plus the surprise of card hand Events as players vie to win in one of three different ways.

It is a skillfully blended collation of classic hex-based wargaming and modern card-driven simulations, No Retreat: The Russian Front stays truly story-centric, providing the proper feel of sweeping maneuvers, exploitation and encirclements across the vast steppes and forests of Russia . With a simple-yet-innovative economic model, players will also feel the growing might and sophistication of the Russian’s Red Army, and the degradation of the once-invincible German Wehrmacht, over the epic four year sweep of time that this merciless campaign was fought.

Neither side can afford the disgrace of yielding an inch of ground to their hated foe, so your orders are: “No Retreat!”