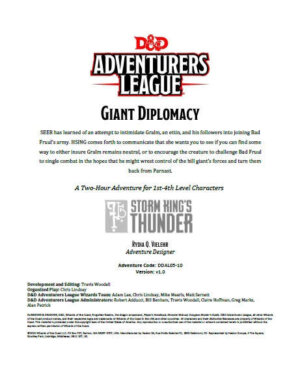 The Stay at Home, Play at Home initiative rocks on at Wizards of the Coast with another free Dungeons & Dragons download. In D&D Adventurers League: Giant Diplomacy, the heroes are asked to negotiate with the ettin Gralm in the hopes he’ll turn against his hill giant ally Bad Fruul. The 34 page adventure is for 1st through 4th levels and can be downloaded free at Dungeon Masters Guild through May 29th.

SEER has learned of an attempt to intimidate Gralm, an ettin, and his followers into joining Bad Fruul’s army.

HSING comes forth to communicate that she wants you to see if you can find some way to either insure Gralm remains neutral, or to encourage the creature to challenge Bad Fruul to single combat in the hopes that he might wrest control of the hill giant’s forces and turn them back from Parnast.