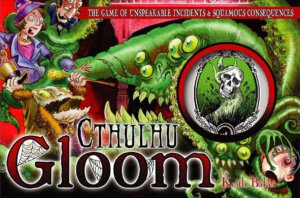 In Cthulhu Gloom, you control a group of Lovecraftian protagonists and guide them down a path of horror and madness to an untimely death, while keeping your opponents happy, healthy, and annoyingly alive. While your characters Gibber With Ghouls and Learn Loathsome Lore to earn negative points, you’ll encourage your opponents to be Analyzed by Alienists and to Just Forget About the Fungus to pile on positive points. When one group finally falls prey to the interdimensional doom that awaits us all, the player whose characters have suffered the most wins.

Oddly enough, after learning and playing Redakai, I’ve come now to a second game with transparent cards. Cthulhu Gloom is a new version of the original Gloom, but with a Lovecraftian bent. The two games have different card backs, so you won’t be mixing them together as opposed to the claim on the Atlas Games website.

The basic premise of the game is that you are in control of one of four families including Miskatonic University, The Whatleys, The Villiage of Innsmouth, and the Arkham Sanitarium. Each family has five members, and your job is to make sure that every member of your family lives the most miserable life possible, and then dies. 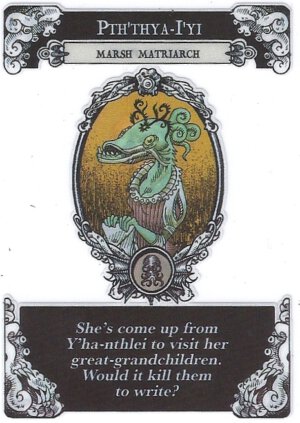 I have to point out that this made more sense in the original Gloom, as it was explained in the storyline that your family members believed if they are tormented and miserable in life, then they will have the most glorious afterlife. This doesn’t really fit with Cthulhu Gloom, but it does fit with an overall Lovecraftian theme. How many H.P. Lovecraft characters lived to enjoy a happy old age? So while your motivation for making the family miserable and then killing them off may not be apparent, it is still very much in theme.

You lay your five members of your family in front of you on the table. If you are playing the five player game, then you pull one member out of each family to make a kind of misfit group, and every player would actually start with four members instead of five.

My daughter had a problem with the families themselves. She was not happy that each family had exactly one female member and said it was sexist. I did explain that there are not a lot of female Lovecraftian characters, but even though she was partially joking I think it did bug her on some level. The Innsmouth family actually has two female members; unfortunately one of them is a fish person. I leave it to you to make your own decision.

There are five story cards included too. Story cards are shuffled, and then two are randomly selected to use in your game. A story card can be gained by having the right number of icons showing on your family member’s cards. You can claim the card and gain its benefits as long as you hold on to it. Certain event cards can cause you to lose a claimed story card. 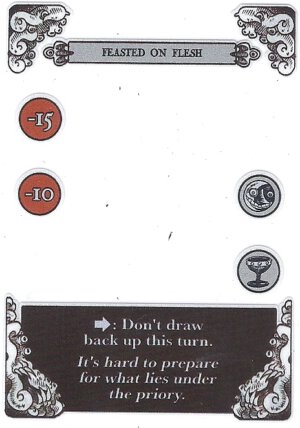 For example the “Call of Cthulhu” story card allows you to count your living characters toward your final score at the end of the game, a big bonus if you are not the first person out. Hint: The story cards are the cards with the Green text. It took me a minute to figure that out, even though it does mention it in the two pages of rules.

The rest of the cards are made up of modifier cards, event cards, and untimely death cards. Modifier cards will have up to three icons along the left side. Each one contains a number that will either add or subtract from your pathos score. Your pathos score is the total of all three icons that determines the value of each family member during the end of game scoring. During the game you’ll want to play cards with negative modifiers on your own characters, and those with positive numbers on the other player’s characters.

Event cards cause some event to happen, or can cancel another event. Events can include bringing a dead character back to life, removing modifier cards on characters, and so on. 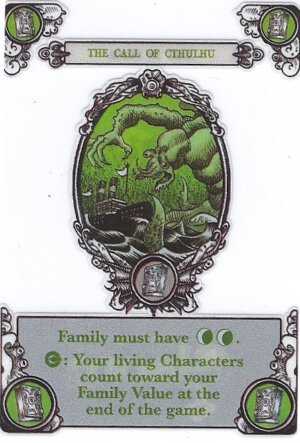 Each player draws five cards to make up their hand, and the person who had the most insane day goes first. Each turn you may play two cards, and you may only play an untimely death card as your first play. After your two plays, you draw back up to five cards. There are many cards that have special effects, such as increasing or decreasing your hand limit, discarding or drawing cards, etc. These effects can be strategically played to really cause problems for your opponents.

The cards also have story icons on the right side, to give you an indication as to what the heck your family member is getting themselves involved in. They also come up in various card effects, and can give you a bonus to your pathos score if you have the right icons when you kill them off.

While you play the cards, they suggest that you try to tell a story with the cards you play. Each card has a small phrase that you can build on using your story icons to describe the entire miserable life of your family member. For example if Wilber Whatley was “Stalked by Shadows”, you could explain that he was headed to the university to do research to figure out what Old Whatley “Discovered in a Diary”. Unfortunately the shadows followed him and drove him a bit mad, and then the very next turn he was “Eaten by Frogs” and would be investigating no more.

Adding some story into your game is what makes it a more fun, thematic experience. You can easily play without doing this, but it becomes a lot more mechanical. I always encourage the storytelling, there is no right or wrong way to do it.

You continue taking turns and playing cards on top of cards until one family kills off its last member. Then the 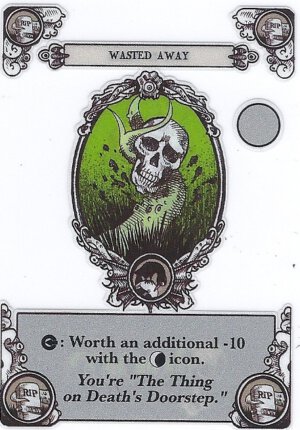 game is over and you add up all of the points that are showing on your dead family member’s cards. The family with the lowest score wins the game.

It is just a Cthulhu version of Gloom, so if you like Gloom you should like Cthulhu Gloom. It isn’t really as funny as Gloom can be; it is a little more somber as one would expect in any Mythos based game. It is all still very tongue in cheek and a fun way to start or end the evening of gaming. If you find that your games are taking to long, just use less family members and it will shorten game time.

One problem we ran into a couple of times is that the discard pile eventually gets so small, because you are using up all of the cards as you play, that you start seeing the same events come up over and over which can get annoying.

Some of the card interactions can get a little fiddly, where you think “Ok, how the heck does this work?” You can figure them out, but sometimes it can be a head scratcher. A couple of times I wasn’t sure if a particular card actually killed off the character. It isn’t rocket science though so we didn’t fret about it too much.

Overall, I liked Gloom, and so I like Cthulhu Gloom, especially with a theme I so much enjoy.

TGG REVIEW
7 TGG SCORE
0 VISITORS' SCORE (0 votes)
Summary
Cthulhu Gloom isn’t really as funny as Gloom can be; it is a little more somber as one would expect in any Mythos based game. It is all still very tongue in cheek and a fun way to start or end the evening of gaming. Overall, I liked Gloom, and so I like Cthulhu Gloom, especially with a theme I so much enjoy.
REVIEW SCORE
What people say... Leave your rating
Sort by: