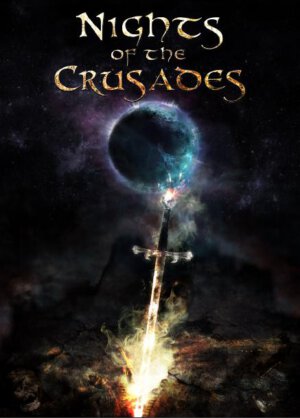 Nights of the Crusades is a roleplaying game set in a land and time that is familiar on the surface, but within its cracks lie tales of sorcery, madness and violence. It is a world that could have happened and then been lost to barbarity and time. Players take on characters that can explore its lands and plunder it for wealth or knowledge. The Tale-Weaver is their guide, plunging them into the horrors of war and fanaticism as they pursue their goals. The world is rife with dark cults, creatures that dwell in unseen places and bloodthirsty warriors. This is a time when anyone’s thoughts, from king to slave, are enough to condemn them to death and hell, and many are they that will line up to cheer the execution.

The setting of Nights of the Crusades is a mixture of the One Thousand and One Nights, the history surrounding the Crusades and both modern and ancient tales of terror. The rules reflect mature and gritty issues, including the psychological impacts of combat and killing. The gameplay also allows for tension in every form of conflict, whether verbal or physical, and the game becomes more complicated as the characters advance. A group of companions made up of an artist, diplomat and physician will be as enjoyable to play as one made up of a warrior, archer and thief.”

Aetheric Dreams is hoping that the interest RPGers had for settings like Dark Sun and Al-Quadim might make Nights of the Crusades appeal to players who like exotic fantasy set in grim, harsh environments.

Best of all, it is free. Nights of the Crusades is a free pdf download at aethericdreams.com