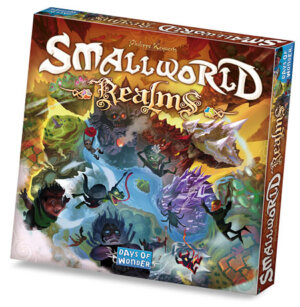 Hey, A new expansion to Small World and SWU is in the offing from Days of Wonder. It will be Small World Realms, and is due out in July.

The Small World Universe is about to get more crowded. Small World Realms is a big new expansion that features scores of puzzle-like geomorphic Terrain regions that are assembled into variously sized and shaped board maps.

Map designs are based on any of the dozen preset Scenarios created by the game’s designer, Philippe Keyaerts. Players can also use the various Terrain pieces to build their own custom maps and scenarios, making Realms the definitive world-building toolkit for Small World and Small World Underground fans alike.
The Small World Realms expansion is expected to be available in better game stores throughout Europe in June and in North America in early July. Retail price will be $35/€33.