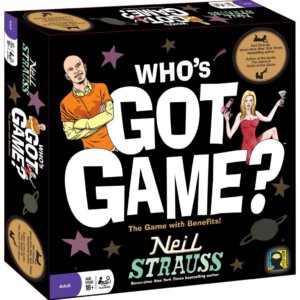 Neil Strauss, seven-time New York Times bestselling author who brought you the international bestselling seduction books The Game and Rules of the Game is back with one question in mind:

“Who’s Got Game?” adds a new twist to being social and can be played anywhere. Whether or not you’re currently a player or playette, there is more game in this box than in most people’s brains. Play it for fun, for training, or for a better social lubricator than alcohol. Like The Game itself, these cards can be used to break the ice and get to know people-whether strangers or your own partner-in minutes.

“Who’s Got Game?” is engineered to bring out the fun and attractive qualities in every player. From physical challenges to personality tests to secret conspiracies, “Who’s Got Game?” has it all. So if you’re looking to turn an ordinary night into a memorable adventure, this is the game for you.

Who’s Got Game is a party game that promotes social interaction that would help you learn more about the other player’s and your partner as well. It is a game based on the bestselling books “The Game” and “Rules of the Game” by Neil Strauss.

Who’s Got Game comes with a ton of cards, scorecards, notepads, pencils, and a sand timer. The main driving force of the game comes from the cards, called script cards, which come in 10 different types:

Cold Reading Cards: Different personality tests similar to the ones you see on Facebook.

Connection Cards: Discover who knows you, and who doesn’t.

Conspiracy Cards: Work closely with your partner on surprising tasks and challenges.

Neg Cards: The leader can steal points form the other players, watch out!

Rapport Cards: Get to know what your other player’s really think. 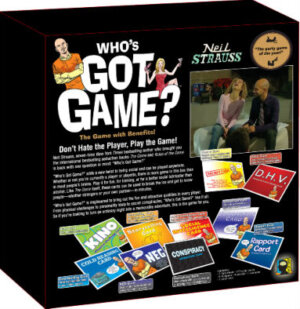 All of these different card types work together to give the players an evening of social interaction and a way to learn about and get closer to your partner.

To play you need to pick a partner, so it is best to play with an even number of players. Choose a scorekeeper to keep track of all the points earned on a scorecard during the game. That player also becomes the first Leader and draws the first card. All of the instructions are on the cards, so the leader just follows the card and distributes the points as displayed.

Play passes clockwise to the next player to be the leader, and continues for 12 rounds. Then the sand timer is turned over and everyone tries to remember one thing that the other players said during the game. You get one point for each correct answer. After that the points are totaled up and the player with the most points wins.

Here’s a few examples of the cards:

Rapport Card: Guess Who Wrote It. The leader reads a question and everyone answers on a notepad. Then the leader tries to match the answers with the people who wrote them. An example question is “Name one deal-breaker for you on a date”, or “If you could be transformed into a product, what kind would you be and what would you call yourself?”

Storytelling Cards involve the leader acting out a situation and the players guessing what it is, like “Seducing” or “Putting on a condom”, or “Winning a Race”.

Social Intelligence Cards are trivia questions like “True or False: Before a baby learns to crawl or walk, a baby will instinctively go through the humping motion” (True).

There are hundreds of cards included in the game, and considering that you only go through 12 per game, it will take a long time to work your way through the cards.

It is a game for adults in a social situation; a few drinks might not hurt either but are not required.

Spartacus: A Game of Blood and Treachery to Return in Late 2020