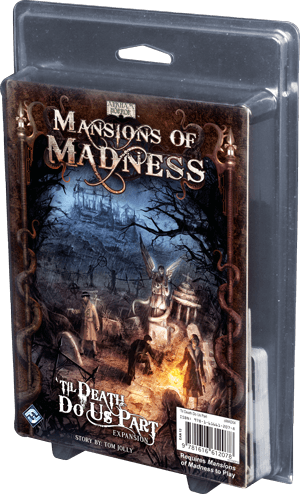 Despite the fact that they will soon be releasing a new boxed expansion for Mansions of Madness, Fantasy Flight Games is keeping the ball rolling with a new Print on Demand expansion titled “Til Death Do Us Part, designed by Tom Jolly. It is available right now!

Here’s all the details:

“It was a terrible, indescribable thing vaster than any subway train—a shapeless congeries of protoplasmic bubbles, faintly self-luminous, and with myriads of temporary eyes forming and un-forming as pustules of greenish light all over the tunnel-filling front that bore down upon us, crushing the frantic penguins and slithering over the glistening floor that it and its kind had swept so evilly free of all litter. ”
–H. P. Lovecraft, At The Mountains of Madness

It started out as a harmless boast in a quiet Innsmouth pub. But what seemed an unlikely drunken yarn will quickly become a living nightmare, as you and your fellow investigators set out to find the truth behind rumors of ghastly human reanimation! Can you solve the mystery behind these gruesome rituals, or will become their next unholy sacrifice?

‘Til Death Do Us Part is the third Print on Demand story expansion for Mansions of Madness! Designed by Tom Jolly (Cave Troll, Wiz-War), ‘Til Death Do Us Part tells a story of love, loss, and dark arcane rituals. Enlist the posthumous aid of an unlikely killer’s past victims… or you might just join them for eternity. 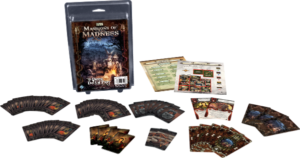 To offer insights into his goals for ‘Til Death Do Us Part, designer Tom Jolly agreed to share a few words:

My initial and continuing objective was to give the players a tense game experience immersed in Lovecraftian mythos. I’d had a horror story idea floating around in my head for quite awhile, featuring certain things that would allow human body segments to function independently.

With this as a foundation, I mined some stories by August Derleth (Lovecraft’s protege) from The Watchers Out of Time to provide the ambience of the game. Can the Old Ones really twist the sanctity of marriage into horror? You bet. I’m hoping players not only find this expansion terrifying, but are sitting on the edge of their seats at the end game, when the balance of their fate depends on just how good their decisions are.

Note: Due to variations in the printing process, cards from Print on Demand expansions will be subtly different in appearance and texture from base game cards. For this reason, 18 of the 58 cards in this expansion are reprinted from the base game to retain a consistent appearance when shuffled, and 40 are unique to ‘Til Death Do Us Part.