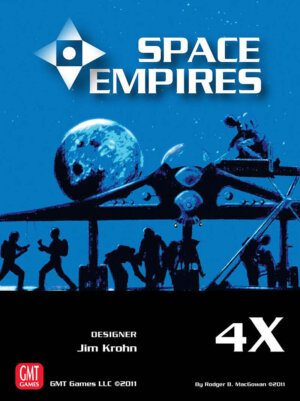 Space Empires 4X is an empire building and conquest wargame. There are a lot of galaxy domination games on the market, but Space Empires has some innovation built into it to distinguish it from other games in the pack.

The conquest part is the object of the game, as the way to win is by destroying your opponent’s home world in most scenarios. The empire building part is simply the means to accomplish this conquest.

Components consist of a mounted map board covered with large space hexes, hundreds of chits, player reference sheets, a player’s aid pad for tracking your empire, and four ten sided dice. The rule book and scenario book are both well done, although there were some questions that came up during play. When I tried to find the answers to these questions, I saw that GMT has released an updated PDF of both the rule book and the scenario book, and the answers to my questions were there.

The first step is to select a scenario appropriate for the number of players. There are a lot of different ways to play in the scenario book, so you shouldn’t have a problem there. In general, each player will select a color and a home world to play with. Following the map setup in the scenario book, all of a player’s space counters are placed face down in a random fashion in their area of space.

The area between the players is filled with Deep Space chits face down. The reverse of the chits when explored will reveal what is located in that hex of space. In your home space, your chits will usually contain worlds that you can colonize or minerals that you can mine. Deep space is a lot more dangerous, with a greater mix of black holes, super novas, and Danger! chits (which mean instant destruction to the exploring ship). In this way, each game is different as you need to send out ships to explore the hexes, which are random each game. I really like this exploration factor, finding a planet on your first turn can put you a little ahead of your neighbors, at least for that turn.

You get a number of ships to start the game, located at your home world. There are scouts, mining ships, colony ships, and ship yards to start you off. The game centers around the production of construction points (CP’s). These are used to produce more ships and purchase technologies to strengthen your empire.

The first few turns you will be sending out your scouts to explore the space around you. When you reveal planets or minerals you will send your mining and colony ships out to do their stuff.

After every third turn, an economic phase occurs. This is where you pull out your player aid tracking sheet and get introduced to some of the bookkeeping that you need to do during the game. This is where you add up all of your current CPs from colonies and mineral acquisitions, subtract your maintenance costs, and use the remaining funds to purchase ships and technologies. You can save CPs from turn to turn if you need to.

There are twelve different types of combat ships that you can produce. Your ability to produce them is based on your technology level, the size of your ship yards, and the amount of CPs you have to spend. Each ship has an attack strength, defense strength, an assigned attack sequence letter from A to E (A fires first, E fires last), and a hull size. The hull size will determine the amount of hits a ship can take before it is destroyed.

Early in the game, you will only be able to build the most basic types of ships, until your technology level improves. One of the great things about building your ships is that you can build groups of ships (up to six in a group). They are represented by a face down counter with another counter under it showing the number of ships in that group. In this way, as you move across the board toward your enemy, they can’t tell what is coming, or how many ships there are in they group. In this way the players have to deal with the Fog of War, not knowing what is coming. You can even build decoy ships to spook your opponent into looking left when the real attack is coming from the right.

The groups of ships you build make up the other bookkeeping aspect of the game. The reverse of the economic tracking sheet is the ship group tracking sheet. You ARE limited by the number of counters available as to what you can build for your empire. The aid sheet will track the current levels of each group of ships. You need this because you can research advancements in attack, defense, movement, and tactics, thus improving the strengths of your ships. They do not get automatic upgrades; you will need to spend a turn at a shipyard to upgrade your older ships to the newer technology level.

It is possible to avoid this whole ship tracking aspect of the game. There is an optional rule that says you can have ships automatically upgraded each time you learn a new technology, which eliminates having to keep track of it on the aid sheet at all. I like keeping track of it though, and I think it adds to the theme to have to dock in order to get upgrades.

One more word about the bookkeeping, it is done with a pen or pencil on the tracking sheets. If you don’t like doing it, then you may not like the game. I’m not huge on it myself, but I found it really enjoyable in this case. It reminded me of an expanded Roll through the Ages tracking sheet, which I find a lot of fun. The nice thing is that all players do the economic phase on the tracking sheets simultaneously, so it really helps cut down on the downtime. 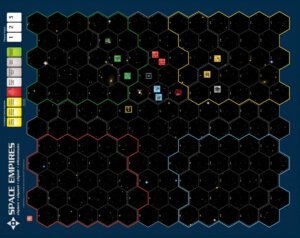 Combat is fairly simple. Move into a hex with enemy units and a battle happens. Players flip over their counters revealing the strength and number of ships. The counters are set aside in order of firing sequence based on their rating from A-E. You take the strength of attacker minus defense of the defender, and rolling under or equal the resulting number on a ten-sided die is a hit. Each ship in a group fires, and takes hits. As ships are destroyed, they are removed and combat continues until the enemy is eliminated or they retreat.

Thus the game continues until one player manages to destroy the home world of another player, which signifies victory for the conqueror.

This covers most of the basic rules. There are a lot more that you can add when you want to like carriers and fighter squadrons, merchant routes, point defense against fighters, raiders, cloaking, scanners, mines and mine sweepers, alien races, warp points, etc. There is enough for you to make it as strategic as you wish. Plus more additional optional rules to add to the realism if you want.

I am having a great time playing Space Empires 4X. A special note about the solitaire game: there are two included scenarios vs aliens and doomsday machines. These are excellent and not easy. I had almost as much fun playing the solitaire scenarios as I had with the multiplayer ones. The game rules are not difficult and you can add or subtract the advanced rules as you wish for your gaming group. The variability and exploration factors added to the many different paths you can take toward your conquest are excellent. It is now one of my favorite sci-fi conquest games and I’m really looking forward to getting a game in against my older son who beats me at everything.

TGG REVIEW
9 TGG SCORE
0 VISITORS' SCORE (0 votes)
Summary
I am having a great time playing Space Empires 4X. A special note about the solitaire game: there are two included scenarios vs aliens and doomsday machines. These are excellent and not easy. I had almost as much fun playing the solitaire scenarios as I had with the multiplayer ones.
REVIEW SCORE
What people say... Leave your rating
Sort by:

An excellent game ! We do enjoy it and every member of my familiy has bought his own issue !