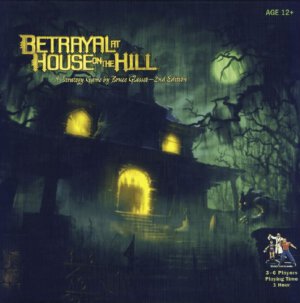 Game Name: Betrayal at House on the Hill – Second Edition

First off I’ve tried to contact Wizards of the Coast a few times; they’ve never responded. I like many others are concerned with their plans for future Avalon Hill releases. Perhaps they are too big and don’t give a hoot about the questions of us small potatoes gamers, who knows? I was happy that they re-released Robo Rally, so that I could get a copy for less than e-Bay prices, and I was very happy when they announced that they were re-publishing Betrayal at House on the Hill. The prices were just too outrageous for the original version, so this meant that I would finally get to play the game. 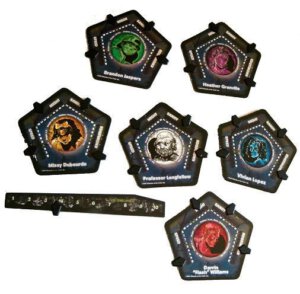 Opening the box I wasn’t too impressed. While the components are pretty good quality, it just seemed like there wasn’t enough in the box for a $50 game. The miniatures are painted, which is nice. The cardstock is not as thick as I like. I prefer the thickness like in Carcassonne or Zooloretto. The Betrayal tiles are thinner and some were warped and don’t sit flat on the table. The character cards are double sided and come with little coffin shaped clips to keep track of your stats as they go up or down. These seem like they will eventually rip the cards or simply fall off. I don’t really like the cards, I don’t know why. It just bugs me that they are oblong and look kind of cheap. The artwork however is very nice overall.

After a quick review of the rules, I figured out that the first half of the game is basically wandering around randomly exploring the house. So we got started on that part of the game pretty quickly. There are 3 tiles that you lay out at the start of the game, representing each floor of the mansion. The players start just inside the front door. On your turn you can perform various actions including movement, discovering a room, attack, use a card or item. In the beginning you’ll be moving and discovering rooms. You do this by opening a door, then pulling a tile from the stack and adding it onto the mansion outside the doorway you just opened. Slowly you build the mansion, discovering rooms, and following instructions on the tiles. When the tile has an icon on it, you have to draw either an item, event, or omen card depending upon the icon. If it is an Omen card, you must make a haunt roll. 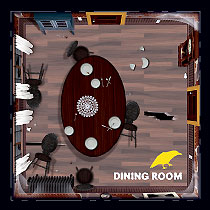 The dice only have three symbols on them: blank, one, or two pips. As more omen cards are drawn, you have to roll a number higher than the number of omen cards currently in play using six dice, or the haunt begins. The highest you could possibly roll is twelve using these six special dice, so the haunt usually begins somewhere around six omen cards in play.

Once the haunt begins, you pull out the book and refer to the chart to see which haunt is taking place.
The game comes with 50 different possible haunt scenarios. You find out who the traitor is, and what the players and the traitor need to do in order to win the game. Then it becomes a race against time to win the game.

I was impressed with the scenarios. They have been pulled from the classic and contemporary horror stories in the movies. Our first game become a version of the movie “Saw”, and we ended up losing to the traitor and getting our heads cut off.

That was really all there was to the game. There is a lot of randomness and luck, and the first half of the game is wandering around aimlessly until a haunt begins. The haunt stories are excellent and fun though. This is not a big strategy game; it is a fun, horror themed game. It is the “Scary Movie” version of a horror game, rather than the “Scream” version. We had a good time, it was fast, and we didn’t take it too seriously.

TGG REVIEW
6.5 TGG SCORE
0 VISITORS' SCORE (0 votes)
Summary
There is a lot of randomness and luck, and the first half of the game is wandering around aimlessly until a haunt begins. The haunt stories are excellent and fun though. This is not a big strategy game; it is a fun, horror themed game. It is the "Scary Movie" version of a horror game, rather than the "Scream" version.
REVIEW SCORE
What people say... Leave your rating
Sort by: