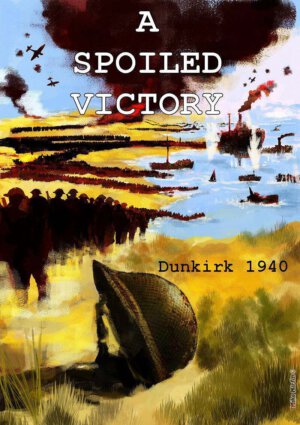 A Spoiled Victory is the second design Hermann Luttmann has put together for White Dog Games. His previous WDG effort is Duel of Eagles and, of course, visitors should be familiar with Hermann’s work for Victory Point Games with Gettysburg: The Wheatfield, High and Tight, In Magnificent Style, and Dawn of the Zeds. Also gaining design credit is Paul Fish. This time out A Spoiled Victory takes on the setting of the Dunkirk beaches during late May and early June of 1940 as the German forces surrounded the British Expeditionary Forces, and assorted French and Belgian allies, poised to drop the hammer to possibly destroy “the whole root and core and brain of the British Army.”

What’s in the Box

A Spoiled Victory is a solitaire game, played out over 18 turns (nine calendar days, broken into day and night turns), where the player is tasked with evacuating as many Allied troops from the Dunkirk beaches as possible. You’ll look to match the “Miracle of Dunkirk” by saving the bulk of England’s fighting future that will battle the Nazis in Italy, France, and North Africa. If you fail, it’s possible Britain’s mighty empire will eventually fall. 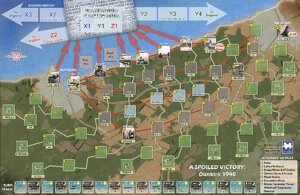 Opening the box, you’ll find the overall component quality pretty solid with a nice paper map, a sheet of thick counters, 36 Action cards, and a reference sheet. I will mention two small issues the components though. First, the counter sheet I received with the game was a bit blurred. Nothing horrible as you can read the combat factors fine but the unit pictures and identification info were tough to make out. Second, the Action cards are exceptionally thin and you’ll want to be careful separating them from their sheets. I have to recommend grabbing some card sleeves right off the bat to help protect the cards during repeated play.

I should also mention while the rulebook is certainly functional, it’s on the bland side and could have used another once over to make it a bit more friendly for the reader. Sometimes I’m surprised when I encounter a game which has some really unique aspects to the design but the rules are presented in that same old, ho hum sort of style we’ve seen for thirty years.

Those of you who have played some of the States of Siege games from Victory Point Games will find A Spoiled Victory very easy to dive into as there are a few key elements of the design which are similar: Action cards which drive the AI of the Nazi forces and determine the number of player actions per turn as well as a map broken up into point to point movement for both the Germans and Allies. There are a few mechanics which are different from the SoS games of course, but if you’re a fan of any of the solitaire games in VPGs line then you should find A Spoiled Victory right up you alley. 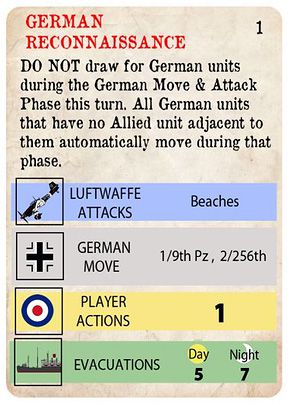 You’ll begin the game by shuffling all the Action cards and setting up both the German and Allied units in their starting squares. Each turn plays out in a specific sequence of events:

Event Phase – The top portion of the card indicates an event which takes place which could affect the current, or possibly, next turn.

Luftwaffe Attacks – Consult the portion of the card which indicate where you’ll conduct air attacks against the Allies.

Escape Moves & VP Scoring – Any Allied units in the English Channel who are eligible to be evacuated off the map can now do so and you’ll score victory points for them. Even though units may be on the verge of escape it’s possible the ships transporting them could be sunk by mines or attacked from the air.

German Movement and Attacks – A portion of the Action card will determine where the German units move forward and attack. Allied units will defend and there’s a chance the German’s can conduct a breakthrough.

Player Actions – Now the player can conduct as many Actions as indicated on the card. The player can move nonsuppressed units from a single space to other spaces on the map. During the day, for a cost of 2 Action Points, these units can move an unlimited distance by truck (four spaces during a night turn) and end their turn anywhere. The player can also create Evacuee units, gather Intelligence to learn where the Germans will move on the next turn, flood the lowlands, build Beach Jetties to assist in the evacuation, raise the spirits of the defenders, and send the RAF on sorties. Some of these actions, such as the RAF attacks have a limited number of uses during each game.

Evacuation Moves – The name of the game is getting your troops back to the safety of England as opposed to taking on the German army. During this phase you’ll move units which you’ve converted from combat forces to evacuees. You’ll use your Evacuation Moves to get the Evacuees to the staging areas and into the Channel. Evacuees already at sea can be moved closer to England.

End Turn – You’ll perform some clean up as well as check to see if the Belgians surrender or German Panzers withdraw.

As I’d mentioned previously, if you’ve played VPG’s SoS line you’ll easily slide into A Spoiled Victory but there are plenty of mechanics which make White Dog’s title stand out. Most importantly the Action Cards are more flexible than in an SoS game; you’ll draw a new card for each of the phases rather than using a single card for the entire turn to determine what happens. This means you’ll reshuffle the deck throughout the game, although some events require you to discard after they take place so they’re removed from the deck.

It’s important to note a few things about A Spoiled Victory. Mainly that this is a game and not a hardcore simulation of Operation Dynamo. Many aspects of the conflict and evacuation are abstracted wherein the player is put in a higher level position so they’re focusing on the bigger picture as opposed to slogging through the minutia of the operation.

Also, the player has to remember the focus of the game is to get the Allied forces off the beaches and back to England. You don’t want to take on the Germans at every opportunity but utilize your combat units to stall the Nazis in order to enable you more time to organize the French and German escape. If you go toe to toe with the Germans you’ll be in big trouble so you better pick your fights very carefully! 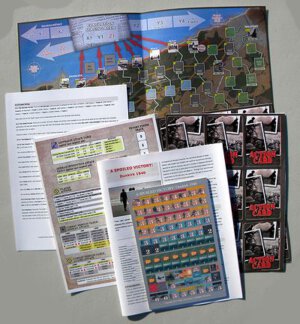 Finally, don’t expect to duplicate the “Miracle of Dunkirk” the first few times you play. You walk a fine line during A Spoiled Victory, reacting to German movement while also planning ahead for moving evacuees and converting combat units into evacuees. You need to cleverly juggle all aspects of the game, draw some advantageous cards and don’t let your dice fail you if you want to have any hope of saving 300,000 plus fighting men.

A Spoiled Victory is another fine Hermann Luttmann design; I like it a quite a bit more than his previous release from White Dog, Duel of Eagles because A) there are some interesting twists to the design which really keep the proceedings tense through the game and, B) I don’t think Dunkirk is really a very easy historical event to game because most designers would probably approach it from an angle tackling more combat and less of what made Operation Dynamo the focus of Churchill’s “We’ll fight them on the beaches” speech: the evacuation.

Unfortunately, I have to ding A Spoiled Victory a tad because of the counter sheet containing blurred print (although I understand this issue has been addressed so if you order the title from WDG you should have a cleanly printed sheet, mine wasn’t), the Action cards being extremely flimsy, and the rulebook being rather bland and in need of a little touch up as far as being more intuitive to get into playing right away. I love the fact White Dog seems to be making big strides in the quality of the components with what seems like every release and I’ll guess it won’t be long before we see the components of the gems being released match the quality of the game play.

Overall if you’re looking for a solid, nail biting solitaire WWII game (especially based on an event which hasn’t been gamed to death – I’m looking at you Battle of the Bulge!) you’ll surely want to get your hands on A Spoiled Victory.

TGG REVIEW
8 TGG SCORE
0 VISITORS' SCORE (0 votes)
Summary
If you’re looking for a solid, nail biting solitaire WWII game (especially based on an event which hasn’t been gamed to death – I’m looking at you Battle of the Bulge!) you’ll surely want to get your hands on A Spoiled Victory.
REVIEW SCORE
What people say... Leave your rating
Sort by: