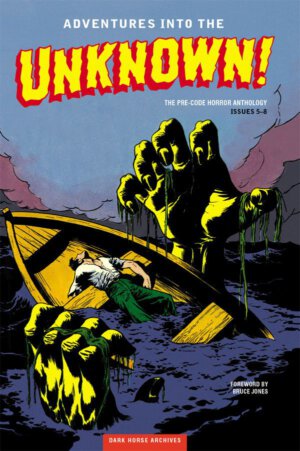 Originally published from 1948 to 1967, Adventures Into the Unknown! is generally acknowledged as comicdom’s first horror title. Published by American Comics Group, which also published Forbidden Worlds and gave the world Herbie, the title was popular enough to withstand the Senate hearings on comic books, although in a watered down state. As part of Dark Horse’s continuing archival reprints, we are now treated to Volume 2 of Adventures Into the Unknown!, reprinting issues 5-8, showcasing the work, according to the title page, of Jon L. Blummer, Bob Lubbers, John Celardo, and Johnny Craig. Tragically, no indication of what these writers and/or artists actually did is made in the volume itself. 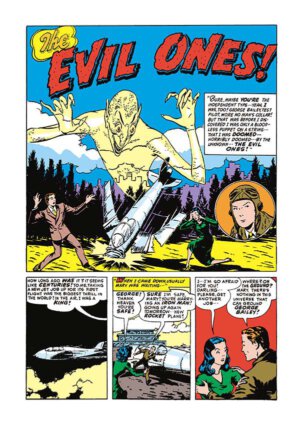 Adventures Into the Unknown! is not a horror anthology per se…the “Unknown” part of the title is taken pretty seriously, as mysterious is more the name of the game. Not all stories have a scary bent, although I suppose it’s fair to say all the stories are spooky. Sometimes the supernatural aspect is neutral or even benevolent to some of the characters, as when the giant Sargasso Specter (and its visage really is creepy) interferes when a couple is threatened by pirates. The first issue even culminates in what’s actually a sweet little love story in which the protagonists don’t end up dead or tortured for eternity, and you’ll find love-conquers-all stories are a bit of a theme in the collection. I won’t spoil the endings of any stories for you (although you being jaded pop culture connoisseurs of the 21st century, you’ll see them all from a mile away…but suffice it to say that “Was it just a dream?” accounts for about 40% of the last lines), but the ending of the stories aren’t really what’s important here.

A big draw of this book and similar books is that it’s pre-Comics Code. And while you might expect heavy gore or knife-to-eye-action, you won’t get it. A forward by Bruce Jones discusses some of the more ridiculous prohibitions of the Code – “unnecessary” gun and knife play is forbidden…meaning necessary violence is cool? – but it’s hard to see how most of these stories wouldn’t have passed muster. Most of the deaths and horror are merely suggested (which, of course, can be more terrifying), and there isn’t copious amounts of blood, torture, or walking dead.  What we have are simple stories from a less cynical time that, while little more than a collection of tropes and clichés these days, were much more surprising and shocking seventy years ago.  It’s a nice look back to a simpler time, and you almost want to pat the book on the head and say, “Isn’t that cute, it’s trying so hard.”

Now that’s not to say it’s not enjoyable…it is…and there are a few surprises that could even make me raise an eyebrow. After all, we all know how any given episode of Twilight Zone will end, but we still get a kick out of it. I found “The Spirit of Frankenstein” series the most interesting, not the least of which because it’s an unusual-for-its-day storyline threading through the issues. Plus, if you want to see a deformed plasticized Frankenstein’s monster kidney punch a ghost, now you know where to go, and yes, it’s as awesome as it sounds. 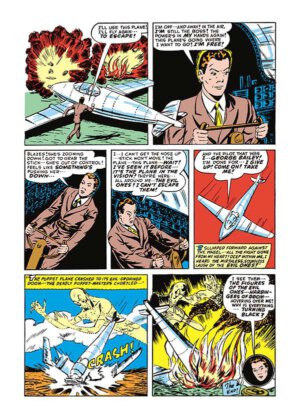 A fun feature is “Strange Spirits”, which discusses legends and creatures from exotic locales. The South Sea’s yoyova and tokway are actually rather terrifyingly described and drawn. A little Googling revealed that the monsters were in fact “real” instead of made up for the book, so thanks for the nightmare fuel there, guys. After the second one, on Bali, the feature seemed to be abandoned, which is a shame. A similar idea, “True Ghosts of History” discusses, well, exactly what it sounds like, but it is abandoned after only one installment.

Something you may notice in reading a large number of horror anthologies is how every book has its take, sometimes multiple takes, on the standards – Jack the Ripper, the Bermuda Triangle, and in this case, the Mary Celeste.  That’s to be expected, and not a strike against, but the trick is can they make it something unique or interesting?  They have a pretty good track record of coming up with a different take.  One thing I could really do without are the text stories. They just aren’t that fun. On the other hand, one thing I got a real kick out of was what amounted to a rather generic reincarnation story about Spanish explorers that was submitted by a reader. While the story was nothing special, the idea of a contest in which the winner gets his story published is a lot of fun, and I just wish it would happen these days (anyone remember the most recent incarnation of Marvel’s Epic?). The best part is that it’s the only credit in the all of the reprinted comics! Good on you, Lynneal H. Diamond!

Should you buy it? If you are a collector of archival reprints it’s a no-brainer; this is a buy. In terms of historical value and interest it belongs on your shelf. If you’re a casual collector, it’s hard to justify and likely a pass unless you’re a fan of the short story horror comics of years gone by…

Should you buy it? If you are a collector of archival reprints it’s a no-brainer; this is a buy. In terms of historical value and interest it belongs on your shelf. If you’re a casual collector, it’s hard to justify and likely a pass unless you’re a fan of the short story horror comics of years gone by...