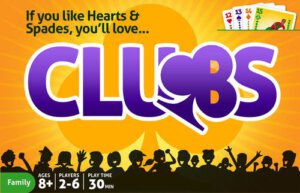 From the official press release: “If you like Hearts and Spades, you’ll love Clubs!

Clubs combines trick-taking fun with a hint of risk. It’s simple enough for kids, strategic enough for adults.  The deck of 60 unique cards opens a new world of play for card game lovers.  The goal is simple: get rid of all your cards as fast as possible.  At the same time, you’ll want to take tricks with clubs in them, because they are the only cards that score points. But watch out! The last player to get rid of their cards scores nothing, even if they have a huge pile of clubs. Pick up Clubs…and win!”

I received a copy of this game in the mail and thought to myself, “Oh, no, a card game!”  For some reason, I’ve never been drawn (pun intended) to traditional card games.  I play Go Fish or Uno with my daughter but that’s about it. Whenever someone pulls out a deck of cards at a party or gathering, I bow out and tell everyone that I’ll just watch. This isn’t because of some trauma due to a prior gambling addiction or I lost the title to my car in a card game. Traditional card games just aren’t my thing, I guess. However, as a trustworthy gaming contributor, I’ve got a job to do and so I examine the box. Nice.  The art looks appealing and family friendly; there’s not a toll free number to Gambler’s Anonymous on the back so that’s a good start.

I open the box to find 60 green cards in all four suits. The cards are numbered from 1 to 15 with no face cards. The cards have a nice coated feel to them and don’t feel cheap. The four cards numbered 15 each have different artwork. The club cards are assigned points. Alright, now I’m getting intrigued. I also find six orange Bonus Cards which are assigned 0, 2, 5, 8, 10, and 12 points each. Besides the nice sturdy box and the two small rulebooks that’s it.

So a few days go by and I haven’t worked myself up to play this game to review it. I do a little more research on North Star Games and find the company makes our current favorite family game: Wits & Wagers. Jeff reviewed this back in 2010 and if you haven’t played Wits & Wagers, you NEED to check this one out! You won’t be sorry. Following this my interest in Clubs became renewed and I immediately went back to the game box to read the rules.

The object of the game is to get rid of all your cards as quickly as possible in each round and win Tricks with clubs in them. I read on and find a word which troubles me: Meld. I think to myself if only I had only played more card games in my youth I’d know what the heck is a trick or a meld. Surely these terms have other definitions besides those pertaining to magic, illegal vice crimes, and Vulcans.  We’ll get to these terms in a bit.

Thankfully the game rules are limited to six small pages and I figure out how to play this game. The game is best played with three to six players. As you start the dealer shuffles the cards and gives each player ten cards. Depending on how many people are playing will determine which and how many bonus cards to lay face up on the table. 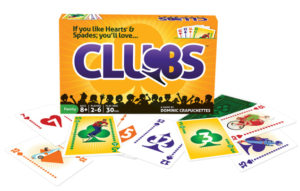 The person to the left of the dealer goes first and puts down one of five melds from the ten cards they’ve been dealt. The meld can be one of a kind (a single card), two of a kind (two cards with the same number), three of a kind (three cards with the same number), or a run: two, three or four cards by way of a standard poker straight, (Editor’s note: as Northstar’s Luke Warren pointed out the rules aren’t overly clear how a runs works but you can have anywhere from two to four cards in a run) Play moves to the left while each player must play the same meld until a trick is won. The melds are placed in the center as each person plays them.

Tricks are won when a player plays a meld with a card numbered 15 or when all other players pass consecutively. The player who won the trick picks up all the cards and keeps them. This is called winning the trick. As a bonus, this player becomes the new leader and decides what new meld to play.

Whenever anyone plays all the cards in their hand they then take the highest available bonus card. The other players, who still have cards, continue the round until only one person left with cards.  This poor chap is forced to take the zero bonus card. This marks the end of a round when players get points for each club they won during the round as well as points noted on the bonus cards they picked up. The game ends after any round where someone has scored fifty or more points. Yes, you’ll need to keep track of this with a pencil and paper, a memo on your cell phone, or lipstick and a napkin, or whatever method you like best.

You can still play with only two players but would only use the bonus card that grants five points.  Also, each round ends after the last trick is taken. There are other variations such as playing partnerships, making the 15’s wild and a game called Crazy Clubs. The instructions describe Crazy Clubs as similar to Clubs but with more bluffing and trash talking.

I have to say although the instructions were brief I did have to read them several times to figure out how to play the game. The introduction of unfamiliar terms (for me anyway) made it a bit confusing and it led to me not being initially enthusiastic about playing.  It helped a lot after playing through a practice round. After doing this it was much easier to figure out the mechanics of Clubs. Once you figure it all out I think you’ll enjoy this title. The fact Clubs doesn’t take too much time to play makes it particularly good as a “game appetizer” before you pull out the bigger and more complex games. Of course, it helps if someone figures the rules out first and then teaches everyone else.

The fact Clubs doesn’t take too much time to play makes it particularly good as a “game appetizer” before you pull out the bigger and more complex games. Of course, it helps if someone figures the rules out first and then teaches everyone else.