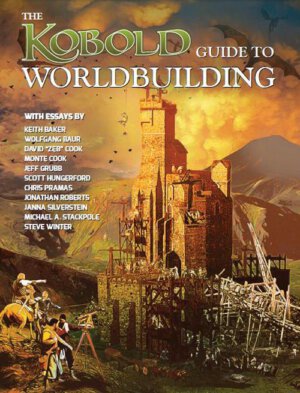 Title:  The Kobold Guide to Worldbuilding

From Kobold Press: “Roleplaying games and fantasy ­fiction are filled with rich and fascinating worlds: the Forgotten Realms, Glorantha, Narnia, R’lyeh, Middle-Earth, Barsoom, and so many more. It took startling leaps of imagination as well as careful thought and planning to create places like these: places that readers and players want to come back to again and again.  Now, eleven of adventure gaming’s top designers come together to share their insights into building worlds that gamers will never forget. Learn the secrets of designing a pantheon, creating a setting that provokes conflict, determining which historical details are necessary, and so much more. Even take that creative leap—and create dazzling worlds of your own!”

“Ok class, let’s open our textbooks to page….” Sorry, just one of many flashbacks I got when reading portions of the Kobold Guide to Worldbuilding. At times, the information was so detailed it truly felt like I had stumbled back in time to my college days. And for all you wiseacres (yes, I said wiseacres), I didn’t go to college when football players wore leather helmets and we cheered from the sidelines in raccoon coats. Back to my comment about feeling like I was back in school: If I had to replace my college physics class with Worldbuilding 101, I would have definitely jumped at the chance!  However, the Kobold Guide to Worldbuilding is not a light read. If you were expecting a book of charts and tables for worldbuilding, that’s not what this is at all.

I think the best place to start is to meet some of the professors…uh, I mean some of the authors. I won’t mention all of them but I will mention the ones whose credentials caught my eye:

These are just six of the eleven contributors to the Kobold Guide to Worldbuilding. As you can see, these folks know a thing or two about creating worlds. The reason I thought it important to discuss their bios an accomplishments is because when they speak, it’s worth our while to listen to their thoughts on worldbuilding. 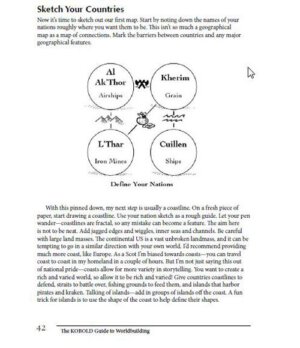 Rather than go in depth with every essay, I thought I’d give you a peak into the titles and then discuss some of my general thoughts on this book. For the most part, the titles reveal the content discussed. The essays are…

The introduction to this book starts:

“Like many of you, I’ve been visiting new worlds with an eye toward buying real estate for a long time now. My passport has more stamps than I can count.” 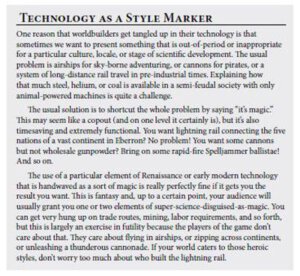 Author Ken Scholes continues with, “I am a traveler of many worlds. I needed to be because this one wasn’t good enough for me. So these others became foster worlds, if you will, where I could play hide and seek with myself through books and with my friends through gaming. And I know I’m not alone.”

C’mon now, that’s a pretty good hook!  Almost as good as “Call me Ishmael.”  Scholes further notes “this volume brings together a fine set of tools, whether you’re a game master or an author.” I’d probably add the professional game designer is another target audience for these essays and that’s not just my opinion but this target group comes up frequently throughout several essays. Advice is given about how to design games and adventures and the various audiences who you may want to serve depending on your designs.

Every book touches each reader in a different way and what may catch my attention, may not catch yours.  However, I thought I’d touch on some topics which gave me pause and caused me to nod my head in agreement or really got the gears turning on how I could incorporate these ideas into my own RPG worldbuilding.

Many worldbuilders, myself included, feel we have to build this huge backstory and history before we can even introduce players to our worlds. Wolfgang Baur notes:

“Partly, this is J.R.R. Tolkien’s fault for, in addition to giving us two great works of literary genius that redefined fantasy, he also gave us reams of backstory going back to the dawn of time.”

That’s exactly right! Darn you Tolkien for setting this bar so damned high!  I tried that in my fledgling days of playing D&D and it’s a darn hard exercise in creativity not to mention the loads of work involved. The book’s authors echo today’s current sentiment about creating only the immediate world which the players will be exploring and leaving “blanks” in the geography and world history to fill in as you get to them. There’s no sense in creating a world your players may not ever explore unless, of course, that’s just your way of flexing your creativity.

Monte Cook discusses one way of building your world: collaboratively with your players.  I like this concept a lot and it’s not just because I’m a lazy GM. But also because it allows your players to create a world they find interesting. When they’re vested in this collaboratively built world, they’ll keep coming back for more adventures in it.

In his ‘How Real is Your World’ essay, Wolfgang Baur notes:

“The closer we get to the present, the more we demand some adherence to reality. Fantasy retreats when the players know all too well what the world is really like, and especially when they may have visited some of the locations involved (or at least, seen them on TV).” 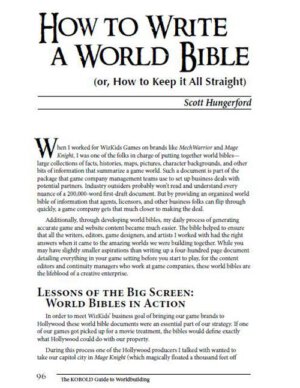 How right he is. I think that’s why I choose fantasy RPGs; anything goes and no one blinks if you describe how your tribe lives in a floating mountain on a cloud city. However, if you say your character is going to use their cell phone to research the ancient cult they’re tracking then all hell breaks loose to determine if your cell phone was capable of accessing data during a particular year in a modern RPG. Yikes!

I thought Jonathan Roberts’ essay on creating maps was very interesting. You and I have both seen (and probably created) world maps which don’t have much rhyme or reason with regards to where villages are placed in relation to resources or whether there’s even a viable water supply nearby.  We didn’t really care, right?  This essay might make you care. If you follow Roberts’ direction, your map may even be used for the next HBO Game of Thrones episode. Well maybe not, but we can dream. At a minimum, our maps will be more clever and of better quality.

I could ramble on about all the great ideas I found but then it wouldn’t be fair to spoil all the fun for you, now would it? Besides, I’m pretty sure Kobold Press wants to sell copies of this tome and not have me give the ideas away for free.

Whether you read this book cover to cover or just read the essays which interest you, you’ll find plenty of ideas to use for building your own wonderful worlds. Let me warn you if you were looking for a book of tables to roll dice and generate worlds, this isn’t that kind of book at all. You’re going to have to work for it and actually read.  (Gasp!)  Perish the thought!  And yes, like any book of essays or short stories, some parts of this book will drag and make you feel like you’re studying for a college exam; albeit a more fun college exam than any I took. Heck for that matter, maybe the Kobold Guide to Worldbuilding SHOULD be considered a textbook on intelligent setting creation.

Whether you read this book cover to cover or just read the essays which interest you, you’ll find plenty of ideas to use for building your own wonderful worlds. Let me warn you if you were looking for a book of tables to roll dice and generate worlds, this isn’t that kind of book at all. You’re going to have to work for it and actually read. 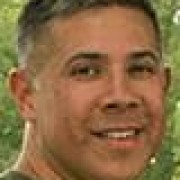 Empire of the Ghouls for 5E | Review and Page-Through