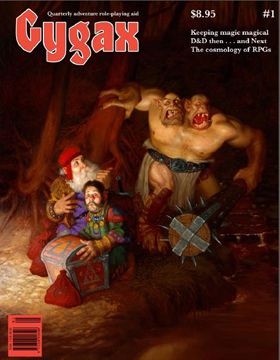 Like many others, I was excited and a little bit nervous when TSR, Inc. announced they would be publishing Gygax Magazine.  It’s not exactly a resurrection of Dragon Magazine but it might as well be.  And like any follow-ups, people are going to either love them or hate them.  I hoped I wouldn’t fall into the latter camp and I was pleased to find out it didn’t.

The first issue of the late Dragon Magazine was published by TSR Hobbies (not to be confused with the new incarnation of TSR, Inc.) in June 1976.  I personally didn’t become acquainted with Dragon Magazine until issue 55 in November 1981.  I had just started playing Dungeons and Dragons and was perusing the aisles of my hobby store when lo and behold!  I see a magazine dedicated to my new love affair with D&D!  Some years ago, I auctioned off my HUGE stack of Dragon magazines on eBay (dumb!) but did keep issue 55 out of nostalgia.  So you can imagine my delight when I was handed the PDF version of Gygax Magazine to review.  Thanks, Jeff!

The cover is very reminiscent of Dragon Magazine both in its art and even the font used for the cover title.  I’m not sure how you read magazines, but I tend to flip through a magazine all the way through before I start reading articles.  It kind of gives me a feel for what’s inside.  The layout immediately took me back to my youth.  Gygax has the nice full page ads throughout the magazine and a section of comics at the end.  I remember pouring through the ads in Dragon and drooling over the poorly reproduced ads for new miniatures and games.  This experience was no different.  There were even some ads for new products I’d never seen before.  The ads for minis were still there as well but it was easier and more fun to see them in color.

The magazine will be published quarterly both in print and in PDF.  It also promises to “cover games from all eras including old editions and out of print classics [as well as] the latest offerings that are coming off the presses”.  I really think every gamer will enjoy this magazine; especially we, (ahem) “more seasoned” gamers.  That sounds nicer than calling us “old gamers” or “senior gaming Americans”.  Anyway, I thought I’d give you a very quick summary of the articles presented in Issue 1.

•          “The Cosmology of Role Playing Games” is a wonderfully written article about how a number of popular RPGs evolved from D&D.  The author describes these evolutions as waves.  The first wave began when D&D was created and took place from 1974-1989.  Besides D&D, some of the games in this wave were Boot Hill, Gamma World, and Star Frontiers.  The second wave took place from 1990-2002.  Games reminiscent of this era included GURPS, Shadowrun and Vampire.  The third wave started in 2002 and continues to current times.  Samples of games included in this era are Cortex, PDQ, and Savage Worlds.

•          “Still Playing All These Years” is an article which starts out describing what it means to be a storyteller in a roleplaying game. The article continues as the author takes us on a small journey of a few of his adventures with the hobby.

•          “Leomund’s Secure Shelter” is a rehash of the former Dragon column titled “Leomund’s Tiny Hut”.  I didn’t like this article and thought it was a rambling piece with little direction.  Disappointing.

•          “The Ecology of the Banshee” is a throwback to similar articles from Dragon.  I really enjoyed this article if nothing more than for the nostalgia of recalling other monster ecology from earlier times.

•          “Bridging Generations” is Luke Gygax’s article on his recollections with the hobby. 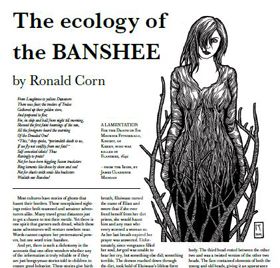 •          “Keeping Magic Magical” is a great article on keeping magic interesting in your game.  The author suggests different tactics to keep the arcane arts new and fun.

•          “Playing it the Science Fiction Way” is an article by James Ward where he describes a game Gary Gygax ran where Gary put fantasy characters in a science fiction setting.

•          “DMing for your Toddler” is an article about introducing children to RPGs.  The author goes so far as to provide a framework of rules for doing this.  Many of us have children and this was a great article.  If we don’t introduce our kids to the hobby, we can’t expect it to continue growing and evolving.

•          “Great Power for ICONS” is an article which discusses power options for the ICONS Superpowered RPG.

•          “The Future of Tabletop Gaming” is a really great article describing how we “seasoned” gamers came to love the hobby back in the 70’s and 80’s and why the hobby became as successful as it did.  The article goes on to talk about the hobby in current times and why it remains a popular pastime.

•          “The Gygax Family Storyteller” is a heartwarming article about the stories Gary Gygax used to tell his children.  This one was written by Ernie Gygax.

•          “Talents Off the Front Line” is an article which was supposed to be about some aspect of the Godlike RPG.  Unfortunately, this article was poorly written and rambles without much direction.  Hell, I wasn’t even sure what the point of it was after I read it.

•          “D&D Past, Now, and Next” is an article discussing is the author’s opinion on why all versions of D&D may not convert properly to the yet to be released D&D Next system.

•          “Gnatdamp: A Sanctuary in the Swamp” is an article describing the village of Gnatdamp and how it can be used as a base of operations for adventurers.  The village is system neutral and includes a map of the area. 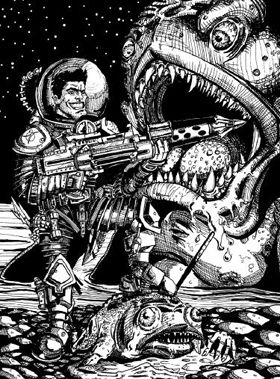 •          “The Kobold’s Cavern” is column which was destined to appear in Kobold Quarterly before its unfortunate demise.  In this column, there is an article titled “Magical Miscellany” which describes a number of magical items for use in any AGE (Adventure Game Engine) system fantasy RPG campaign.

•          “An AGE of Great Inventions” is an article which introduces the Inventor talent to the AGE system.

•          “Scaling Combat Feats in Pathfinder” is an article which discusses just what the title implies.

•          Gygax Magazine also has three comics in the back: “Marvin the Mage”, “What’s New with Phil & Dixie”, and “The Order of the Stick”. I especially enjoyed the “What’s New” comic strip if only because I remember it from early issues of Dragon Magazine.

I think you’re going to love most of this issue of Gygax Magazine. It’s a wonderful publication and very reminiscent of Dragon Magazine. The layout, art, and even the ads were fun to look at. For the most part, the articles were well done and there was enough variety to interest most gamers.  There were a few stinker articles in there and one can only hope the editor will tighten the submission standards for forthcoming issues.

I think you’re going to love most of this issue of Gygax Magazine. It’s a wonderful publication and very reminiscent of Dragon Magazine. The layout, art, and even the ads were fun to look at. For the most part, the articles were well done and there was enough variety to interest most gamers.