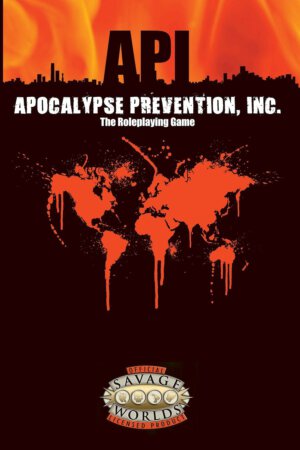 Year: 2012 for the Savage Worlds Edition

Playing Time: It’s an RPG so it could be indefinite!

From Third Eye Games – Join the fight to protect earth – Now using the Savage Worlds ruleset!  Monsters and demons have existed on Earth since its inception, terrorizing humanity throughout history. But some of them decided to fight back, creating a company of like-minded beings (even other demons) to defend the Earth from supernatural threats.

The premise of the game is to create and play an agent of the ultra-secret agency known as Apocalypse Prevention, Inc. (API). The goal of API is to protect the earth and its citizens from destruction by a whole host of demons. Demons are defined in this game as humans that have been altered in some way (like vampires or mutants) or beings that have arrived from other dimensions. The game’s genre is described as horror with a comedic twist.  The whole time I read this book, I felt like I was reading the background script to the Men in Black movies that have been so popular. I’d say the races are so fantastic and at times comical that they feel like characters from this movie series. The twist is that the bad guys are not from space but with terrestrial origins or from other dimensions.

I’ll do my best to briefly describe the playable races in this game. Mr. Lasanta did a fantastic job fleshing out each race going so far as to provide their background and how they might fit into API 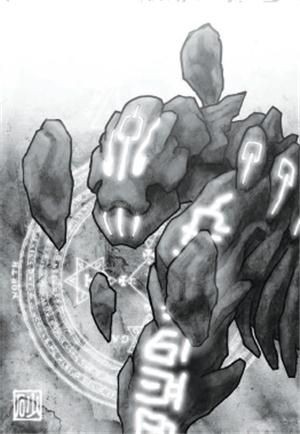 as a recruit. He provided a great deal of imagination and information for each. 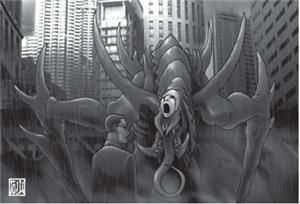 Toward the end of the book, the author discusses the API organization and culture. API began as a result of the Black Plague in Europe. A group was formed to determine the cause of the plague. What they discovered was that a Rat Queen and her rat minions were spreading disease all the while dining on corpses from nearby cities. She was defeated only with the help of demons. Today, API is lead by a global CEO named Annabelle Priscilla Ilsley. Interestingly enough, her initials are also API. Ilsey departed into the netherworld approximately 15 years ago but continues to head the organization as a spectral. Now that’s the definition of a true workaholic! The ten major API offices are located in the United States, Brazil, South Africa, Japan, India, Nigeria, England, Russia, Canada, and Mongolia.

Agents are required to sever ties with friends and family and commit themselves fully to API. There are portable devices that can erase the memories of their friends and loved ones but most often a new agent’s death is faked. Standard attire is a black suit, white shirt, black tie and black sunglasses. 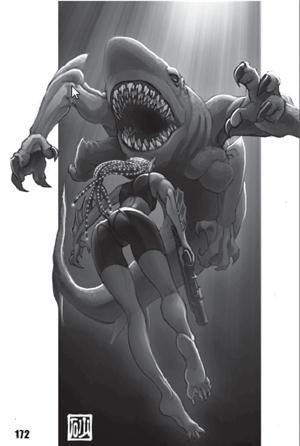 API is charged not only with preventing world catastrophes but also keeping tabs on supernatural beings. All supernatural beings that come to Earth are required to fill out paperwork to register themselves and obtain an ID card….just like you and I getting a driver license at the DMV. Fun times. These supernatural beings (or demons as they may be called) can also operate businesses but these businesses are subject to audit by API. They cannot sell prohibited merchandise such as items that may affect the vulnerabilities of friendly demons.

I hate to criticize a product which someone else spent a great deal of time and energy creating. However, I would say that API struck me as “cartoony” both in its concepts and artwork. Although the book mentions having a horror element, it didn’t really come across as a horror game. For the most part, the art is something that you might see in a Disney cartoon. Also, I keep referring Men in Black because API feels like a direct descendant or a kissing cousin of these movies.  It would have been nice to at least have aliens and certainly some of the same aliens in the game that are in the movies.  You have Will Smith and Tommy Lee Jones types in API for sure. Since this is an opinion piece and not just a description of the game, I will say that I might pass on this title.  It was interesting but I’m not sure I’d personally run any games in the API world.