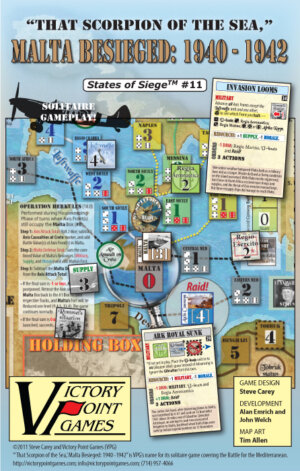 That Scorpion of the Sea: Malta Besieged is a solitaire game covering the pivotal World War II years of the mid-1940 through 1942 period in the often overlooked Battle for the Mediterranean. You are placed in the role of the Commonwealth Commander in the theatre, and must utilize every resource at your disposal to fend off unrelenting Axis attacks in order to ensure the survival of the island of Malta.

Built upon the same States of Siege engine as the designer’s previous 2010 Charles S. Roberts award-winning release (We Must Tell the Emperor), Malta Besieged features both familiar and innovative game play. Supply was the key element in the Mediterranean Campaign, and so it is here as well. Players will have to safely shepherd vulnerable convoys – and their valuable cargoes – in order to effectively wage war. With the ability to trade Supply for extra Actions at the most crucial moments, this places an additional emphasis on that precious resource and also creates extremely tense convoy battles which will resolve as the game progresses.

Readers (and listeners) know I’ve been looking forward to the newest release from VPG and I can say that it certainly doesn’t disappoint! In fact, this may just be the fastest turn around on one of my reviews ever! I received the game in the mail last Wednesday and got in a couple of plays that night and then a couple more prior to our recording the show last Thursday…

That Scorpion of the Sea: Malta Besieged 1940-1942 is a follow up to Steve Carey’s Charles S. Roberts award winner We Must Tell the Emperor (WMTtE). This time around you’ll take the helm of the Allied forces, of the British Commonwealth, in an attempt to hold the island of Malta while doing your damnedest to keep war material flowing through the Mediterranean in order to keep up the fight against the Axis in North Africa. You’ll find Malta Besieged (as I’ll refer to the game as from here on out) shares a lot of common traits with We Must Tell the Emperor, as well as some other titles in the States of Siege line, but also brings new wrinkles to the design as well. 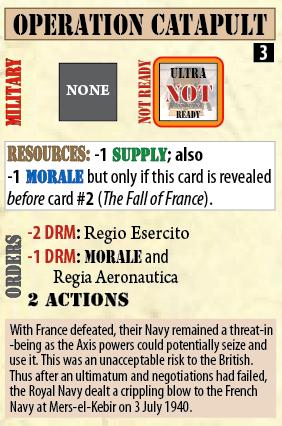 For those wondering what somewhat stays the same, I can say those who have played WMTtE – or just about any States of Siege (SoS) game from VPG – will slip right into gameplay like a pair of comfortable slippers. There are the various tracks your opposing forces will continue to advance along thus bringing you one step closer to doom; the action cards in which the opponent A.I. filters through as well as determining effects on your resource tracks and available actions for you to take; a special battle table that corresponds with specific action cards representing critical historic operations; loads of background and flavor about the theatre simulated.

Wondering about the differences in this new title? I’ll get to those as the review proceeds.

You’ll begin the game with three resource tracks which you’ll struggle during the game to keep at acceptable levels: Military, Supply, and Morale. Filling the Military and/or Morale tracks will provide you with a bonus, while one point of Supply can be spent to provide you with an additional action in a turn. As with any of the SoS line, you find there are so many more actions that you’d love to take than what you have currently available. The action cards provide you with the number of actions you can take and I believe that the player finds they have fewer than they would normally expect if they previously played WMTtE. I believe this is the case, in part, due to the fact you can gain an additional action by spending a Supply point in a turn.

This time out, there are five different tracks in which enemy forces will advance onto the tiny fortress of Malta: U-Boats (German attacks on supply convoys), the Luftwaffe (German pounding of the island defenses), Regina Marina (the Italian Navy), Regina Aeronautica (yes, the Italians did have an air force), and the Desert War (reflecting the fighting in North Africa against the Desert Fox, Irwin rommel). Unlike many SoS games, your attackers aren’t going to start the game at the furthest space along their tracks so you’ll find that some forces are much closer to kicking in your teeth than others. Also, in Malta Besieged, if any of these fronts advance into the zero box of the tracks – which is Malta – you’ll play out Operation Herkules as opposed to automatically losing. Sure, you still may lose (and there are other ways to lose the game) but you still have a shot of staying alive for another turn.

You win by playing through all of the action cards and forcing Rommel back beyond Tobruk on the Desert War track or simultaneously defeat all the Axis fronts. Losing is a more likely situation as the game ends in defeat if you enter into the Housekeeping phase with all of your resources at zero, or Axis forces are in Alexandria during Housekeeping – an automatic defeat occurs at any point Rommel enters the Cairo box, or if Operation Herkules succeeds.

Each turn begins by revealing the top card of the deck and seeing what the Headline is. Normally, this will be the main event taking place for the turn and indicate what enemy forces are going to advance along their respective tracks. It might call for a convoy battle to take place, which can really hamper your ability to continue to keep the wolves from the door. Not all is in the Axis hands as you have actions available to attack fronts to push them back, make raids, try to fortify, gain more resources, and more. As I previously pointed out, there’s always so much more going on needing attention that can never be addressed at one time.

There’s a lot going on in a particular turn and it’s important to take your time as you progress. There are various different modifiers that come into play as well as options available that can easily be missed if you just flip each card and spend actions. It’s possible there’s too much going on for some players to effectively stay on top of; I certainly wouldn’t recommend Malta Besieged for someone’s first foray into wargames! You’ll be looking to use ULTRA intelligence to modify die rolls, utilizing the ability of Spitfires to gain air support for your convoys, bringing the intangibles of General Sir Alan Gordon Cunningham into the fray, determining extra supplies from convoys, and so much more.

Dare I say there may be some aspects of the Mediterranean theatre that receive undue attention in a game that abstracts many other aspects? Some players may get an “everything but the kitchen sink” feel with some of the items you’ll need to keep an eye on at any time. This isn’t to say I have any sort of issue with the design issue but the complexity rating, four out of nine, VPG has assigned the title might be a bit low in my opinion. Plus, to effectively play with an eye to success, you’re going to spend an average of 75-90 minutes to complete the game as opposed to the aforementioned sixty.

In other words, you’ll want to step up your game when you tackle Malta Besieged! 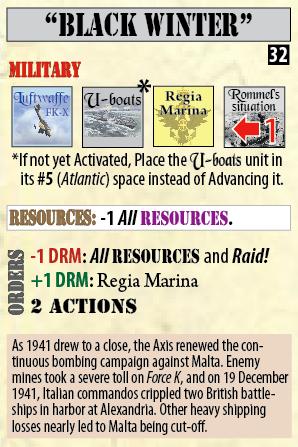 In the end, Steve Carey has shone a light on an area of WWII that I’m not aware had received much treatment in the past. Obviously the battles in North Africa have nearly been done to death but the overall tale of that keystone to success has passed under the radar. Due to my interest in naval actions during WWI, I’m familiar with the goings on in the Mediterranean during that war but wasn’t overly familiar with this aspect of the second world war so I learned wuite a lot with this game. The design is tight, although I personally believe there’s possibly a little too much cooking in the pot for what most expect from a SoS title. This could deter gamers who are into much lighter wargames; those who enjoyed WMTtE might find Malta Besieged bogging down a bit on their first play throughs because they need to stop and double check specific instances in the rules: “Ok. I have this many hits on this turn’s convoys but I had Spitfires in the mix, and ULTRA was still available. What does that mean?”

Best bust out those rules again!

Many readers are going to be asking if Malta Besieged is a better game than WMTtE and my answer is going to depend on the sort of gamer you may be; if you found yourself taxed to the limit beating the Allies (or even giving them a temporary black eye) in WMTtE this is not going to be your bag of tricks. On the other hand if you ate up the previous design from Steve Carey, and can stay focused on the various niggling die modifiers, you’ll be very happy and should be chomping at the bit to get your hands on Malta Besieged.

Finally, I’ll mention that VPG is including a two page example of play as well as some playtester Q&A (I can’t say I remember ever seeing Q&A before from a VPG title before) in order to help tackle the rules as well as explain core concepts of the design. It’s obvious Malta Besieged is a bit of a different departure from usual States of Siege complexity – not to mention VPG no doubt want to successfully follow up on an award winner – so you’ll find quite a lot of clarification on some aspects that might not be as clear as day in initial plays.

For those who enjoy a more casual game, that masquerades as a wargame, you may want to take a moment to make sure you have the attention to detail required by the title before you place your order. I can happily say for the serious (or semi-serious) wargamer, Malta Beseiged is a must have! 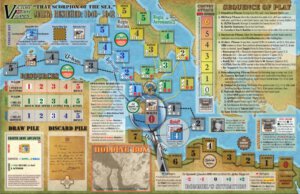 Save Big with the Legendary Ultimate 5E Bundle of Holding