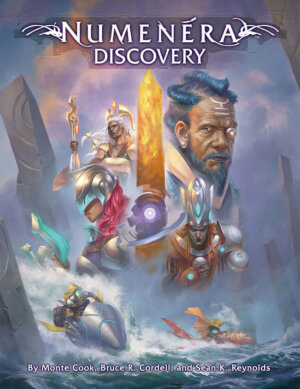 Currently you can score big savings on the Numenera roleplaying game, from Monte Cook Games, through Bundle of Holding. You can get aboard the popular science fantasy RPG for as little as $17.95 or go all in to grab the entire bundle for $37.56. Grab these savings through September 27th and ten percent of your payment (after gateway fees) will be donated to this offer’s pandemic-related charity, Direct Relief.

Explorer! This Numenera Discovery Bundle presents .PDF ebooks of the 2018 update and expansion of Numenera, the Monte Cook Games science-fantasy tabletop roleplaying game of discovery and destiny in the Ninth World a billion years away. This is the Bundle of Holding debut of Numenera Discovery and its companion volume Numenera Destiny, both funded in a spectacular US$845K September 2017 Kickstarter campaign. Many titles in this offer have never appeared in any bundle.

Numenera is about exploration in the far future. There have been eight worlds before ours. The people of the Ninth World suffered through a dark age, an era of isolation and struggle in the shadow of civilizations millennia gone. But a new age dawns. Brave explorers who discover and master the works of the past worlds — the numenera — can unlock new powers and abilities, defend the weak, bolster the sick and starving, build a community, and perhaps bring a greater destiny to a struggling world.

For just US$17.95 you get all nine titles in our Discovery Collection (retail value $93) as DRM-free ebooks, including the complete full-color 418-page Numenera Discovery corebook (plus the Player’s Guide, Character Portfolio, and many freebies), Priests of the Aeons, the Technology Compendium, the Ninth World Guidebook, two sets of Maps of the Ninth World, and the Character and Creature Standups.

And if you pay more than the threshold price of $37.56, you’ll level up and also get our entire Destiny Collection with eleven more titles worth an additional $146, including the Numenera Destiny companion corebook, the campaign expansion Building Tomorrow, all three Ninth World Bestiaries, the location sourcebook (uhh? sorta?) Voices of the Datasphere, the massive two-part campaign Slaves of the Machine God, the adventure anthology Explorer’s Keys, and three Ninth World adventures: Forgetting Doomsday, Shadewalker, and The Thief, The Clave, and the Ultimatum.