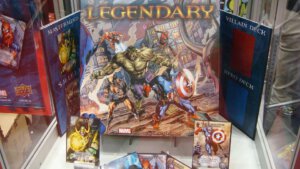 Jeff and I had the opportunity to sit down and play the demo of Legendary, the upcoming Marvel Deck Building Game to be released by Upper Deck this November. Here in the video you’ll get a chance to see the layout of the game, some of the wonderful original artwork on the cards, and watch us play a few rounds. It isn’t the entire game, but we did defeat Magneto.

To win the game in Legendary, you will have to defeat the criminal mastermind on four separate occasions, as each villain has four cards. Every time you defeat the villain, something bad happens to everyone, so it isn’t a task to be taken lightly. We finished in 30 minutes, and that was with all of the explanations.

Other Mastermind villains include Loki and Doctor Doom!!!