Be the Envy of YOUR Gaming Gang!: A Review of ‘Dungeon Builder Sets’ from Mr. Dandy

Retail Price:  Various, depending on the pieces

From the official press release:

Modular architecture and items to build nearly any dungeon you’ve been imagining!  Scaled to suit 25/28mm miniatures and 1″ square dungeon maps. Also great as structures for your wargame battlefield. Many more options are in the design process now! Cast in high quality gray resin. All terrain models are supplied unpainted.

A couple years ago I discovered dungeon walls and floors from a very well-known company which will remain nameless. After a few weeks of contemplation and drooling over the images on the company’s site, I decided to go ahead with my purchase. The price was a bit steep but the marketing was fantastic! Besides, I would no doubt recoup my investment with all the time I would spend creating realistic looking dungeons for my fellow gamers not to mention the looks of envy I would receive when they came over and played with this set.

The reality is this boxed set sits in my closet and didn’t get any playtime with my gaming group. Oh sure… It looks pretty but, due to the design of these pieces, you’d need to spend several hundred more dollars to get enough other pieces to create a decent looking dungeon. In this particular set the walls are connected to the floors and it’s an additional headache to configure rooms with my “small” (heavy on the sarcasm) $100+ investment. As a busy adult, I don’t have time to work on jigsaw puzzles just to set up for game night. Talk about frustration!

In the end I gave up on dungeon terrain and went back to drawing on blank grid paper or using preprinted maps; I even tried mapping software for a while but found that was a lot of work as well. The software is a whole different story I won’t get into here.

A few weeks ago I was browsing Pinterest and, low and behold, someone had pinned the Wargamma Dungeon Builder Set. The set definitely caught my interest and the more I read, the more interested I became. James Hakola of MrDandy.com was kind enough to send me a Dungeon Builder Set for this review. You may recall James from a news piece Jeff did last year on the Wargamma miniatures line which Mr. Hakola also sells. As a side note, you definitely need to check those out as well!

The Dungeon Builder Sets are very cool! All the pieces I received were very detailed and there’s enough differentiation in the casts so all the pieces didn’t look exactly the same. Seriously, we all like our miniatures and terrain to look as real as possible right? That realism helps with the mood of the gaming experience so making the casts different was a nice realistic touch.

The only assembly you’ll have to do is with the doors as they come in three pieces: the frame, the door, and a post which mounts to the frame that allows the door to swing open and close. I will point out the bottom of the doors require some trimming if you want to mount your door so it opens and closes. For complete disclosure in this review, I didn’t assemble the door but it doesn’t look too difficult to tackle. If you wanted to be a little lazy you could just slide the door into the frame and forget about the post. The door will stay in place in this manner as well but it won’t swing open and close. I suppose it all depends on your preference.

The staircase and stairwell were very nice as well. In particular, the stairwell was a very clever design. This square piece gives the illusion your miniature warriors have found a staircase descending into a lower level. And who knows what dangers the lower levels have in store for your adventurers!

I’m sure at this point you’re thinking, “Ok, Dave. This all sounds great but what’s all this going to cost me?” Let’s get to the best part: It’s all VERY affordable! The most expensive Dungeon Builder Set is $12 for six walls including two 2” and four 4” lengths. That’s about $2 a piece. Consider what you’d pay for that “other” expensive set on the market. Keep in mind you wouldn’t have nearly the same flexibility for building your dungeons either.

I asked James whether he would offer or consider offering a painted version of his Dungeon Builder Sets. And he responded he’s considering this option but it will depend on customer demand. At the price he’s charging for the unpainted sets, I can’t imagine the pre-painted version would cost too much more. At a minimum, I can’t imagine it would be more expensive than that *ahem* “other” set on the market. Mr. Hakola was kind enough to provide some photos of what this pre-painted version might look like. Remember these pre-paints are not yet available but if there’s enough demand that could change.

The other question I asked Mr. Hakola was whether he would be offering dungeon floors and not those attached to walls, mind you, but just dungeon floor tiles of some sort. He replied, “Matching floor sections are definitely in the works along with other wall styles, alternate doors, hazards and decorations, etc. My goal is to make [this] the most versatile set possible. First up will be a portcullis gate with arch.”

Keep up the great work, Mr. Hakola as I look forward to additional dungeon elements!

If you’re a table top miniatures gamer you can’t go wrong with these Dungeon Builder Sets: They’re sturdy, well made with an eye to detail, versatile, and very affordable. You just might find, with the terrain accessories from Mr. Dandy, when you invite your gaming gang over you’ll see them turn a little green with envy! 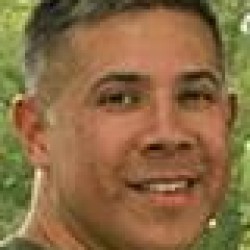 David Hinojosa
David first learned about roleplaying games in junior high when he heard some kids talking about this new game they were playing. His curiosity got the best of him and he bought the blue Dungeons and Dragons box set at his local hobby store.

If you’re a table top miniatures gamer you can’t go wrong with these Dungeon Builder Sets: They’re sturdy, well made with an eye to detail, versatile, and very affordable.