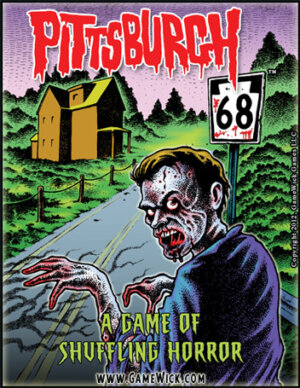 Thrills and chills await in Pittsburgh 68, a frenzied card-n-dice game that plays like a zombie survival movie!

In Pittsburgh 68, players face an ever growing zombie problem (which they will probably end up being a part of). When a player is eliminated, they don’t stop playing – they just shuffle back in as a zombie.

A cooperative game until it’s not, Pittsburgh 68 pays homage to a time when slow moving zombies ruled!

Everything needed for play is in the box: the Shuffling Horror deck (60 cards), four six-sided dice, 60 spoints (counters), and rulebook.

Pittsburgh 68 is neat little zombie card game for 3-13 players. Yes that’s right I said 3-13 players. There are 60 cards in the box of nice quality in shades of black, white, green and red with decent zombie artwork. There are four standard dice and a number of tokens called spoints. 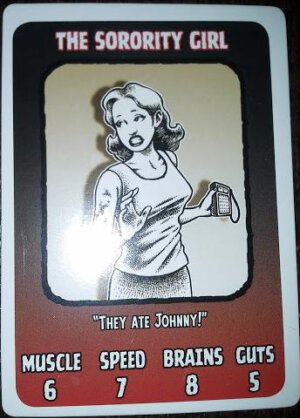 The rest of the cards consist of items, action cards, and of course zombies. The initial set up is more complex than you would figure in a card game, and the rules could really use a bit of work as I had to read them and refer to them multiple times in order to figure the game out.

Once all players have their survivors (only the first one is turned face-up, the others, if any, remain hidden until you spend a turn later to flip them up to join in), each player gets seven spoint tokens that go into their general pool. Spoints tokens are used to either bump up your chances of rolling a successful attack, bump up your damage roll, or negate damage done to your survivor by a zombie. They are very important and your management of these plays a crucial role in your success in surviving the entire game. These first seven general spoints you get can be spent on any survivor you control, or even used to help other players to survive. Later, your survivors can earn their own personal spoints by resting for a turn. These personal spoints can only be used by the survivor they are assigned to.

The game is broken into four parts called reels. The reels should be considered the parts of the zombie movie you’re all basically taking part in. you have the opening, the build-up, the onslaught, and the final bid for survival. Each reel requires you to take a certain number of cards from the deck and form a reel deck. Once the players work their way through these cards, the reel will end, the cards are all reshuffled, a new reel deck is formed, and the process starts again.

In the first reel, there will be ten cards. Shuffle up all of the cards and peel off ten and place then face down in the center of the table. The remaining cards becomes the Dead Pile. All unused cards are in the dead pile (face down), along with any cards discarded during the play of the reel (Next to the others, face-up).

The zombie player controls the cards. To start the game, he first flips up three cards from the face down dead pile of cards into the center of the table. These are the dealt cards, and where most of the manipulation takes place. If any of these three cards are zombies, the zombie player takes them and places them in front of him as his starting zombies. Each one is considered a lone zombie.

Any cards taken this way are replenished from the Reel deck. Then any action cards are resolved immediately, this continues until you are left with only zombies and item cards in the dealt hand of three cards. If at any time all three cards are zombies, a three-card-zombie occurs. When this happens at any time during the game the zombie player immediately takes one of the zombie cards and replaces it with a fresh card from the Reel deck, if it happens again he does so again, until the three-card zombie stops. In this way the zombie player can build up a horde of zombies pretty quickly. If one is triggered by a player, then each zombie in the dealt cards gets an attack on the survivor who caused it. Ouch.

Finally, the reel can proceed with the player to the left of the zombie master taking their turn, and play proceeds clockwise from there. I know it seems complicated to get to this point, but it is easy once you have done it a few times. On their turn players can either Reveal a new survivor (if they have another one), or take an item card from the dealt hand and attack with it using the survivor who took it. These are player actions and count for your whole turn. If on the the other hand you have more than one survivor card, you can choose to have each one act individually rather than doing the player actions. Each survivor can either: Attack any zombie, either controlled by the zombie master, another player, or in the dealt hand, Take an item card from the dealt hand or another player (if they wish to give it to them), Rest (resting gives you 2 spoint tokens), or move into a sanctuary.

There are two sanctuary cards in the game; the cellar and the car. If one or both of these is played on the table you can move one or more survivors into them. The car can hold three survivors, while the cellar can hold up to six. Moving into a sanctuary ends that survivor’s turn. On the next turn if that survivor stays in the sanctuary they earn 3 spoints. They can stay in there as long as you wish, but the maximum spoints per survivor is 7. Moving out of a sanctuary doesn’t count as an action.

Why would you want to move into a sanctuary? It doesn’t make lots of sense if you consider that you can spend two turns resting and earn 4 spoints, or spend the same amount of time in a sanctuary and earn 3 spoints. However, while in the sanctuary you cannot be attacked directly by any zombies. If you need a few turns to recuperate and rebuild points, the sanctuary is a good place to hide. The zombie player can destroy a sanctuary though, if they can cause enough damage with a zombie attack. The car can withstand 8 points of damage, and the cellar can withstand 12. 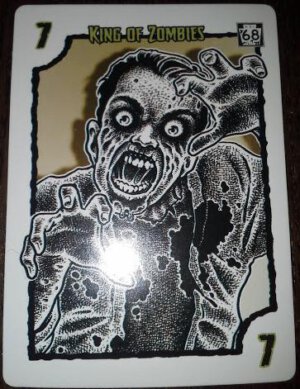 After all the players have taken their turn the zombie master can go. The zombie master can either take a zombie from the dealt hand and attack with it (and its horde if part of a horde), or make up to three attacks with the zombies they have (once from each horde), or draw a card from the reel deck to cover up a card showing in the dealt hand. They might be able to cover up the rifle that the players desperately need with another zombie. Plus if they cause a three-card-zombie, all the better for the zombie master. The card remains covered until the players manage to remove it by taking it or destroying the zombie on top.

Attacking is a simple affair. Each player has four stats: muscle, speed, brains, and guts. By default, all attacks use the muscle score. Some items that you can pick up tell you to use your speed score instead. These items give damage bonuses, but basically have no effect on your attack roll. To attack, select the zombie you are attacking, then add any spoints you wish to improve your chance of hitting. If your muscle score is 5, and you use two spoints, your score is now 7. Roll two dice and if you roll the required number or lower you hit. Each zombie has a strength point value from 2 to 7, and you must do that amount of damage to destroy it. For damage you roll one die. You can add spoints before the roll for extra damage (+1 damage per point spent), and add whatever item bonus you have. If you roll the zombie’s strength or higher, the zombie is killed. If not, then there is no effect, zombies don’t take partial damage. Killed zombies go into the dead pile to reappear in a later reel, unless you do at least 10 points of damage. This is considered a head shot, and that zombie is removed from the game.

Zombie masters attack by adding up the strength of the zombies in the attacking horde, and rolling that number or less. They also do 1d6 of damage, however if even one point of damage gets through to the survivor, they are killed and get added to the dead pile to come back later as zombies. You can stop damage by either spending spoints to cancel it out, again using one point per damage point canceled, or by making a flail roll. This is a roll using your speed score. If you make it you take no damage, if you fail, that survivor is dead.

If a player runs out of survivors, that become a zombie player and operate under the same rules as the zombie master, building up zombie hordes and attacking the other survivors. The game ends at the conclusion of reel four. Any remaining survivors win. If none survive, the zombies have won.

I’ve described much of the game, but not all. There are rules for rolling 2’s and 12’s, different action cards and plot devices that give opportunities to either the survivors or the zombies, there are rules for ending reels early, bonus zombie throngs, advanced play, etc. I’ll admit that after reading the rules I still had no idea what was going on. I had to play the game, and then go back and reread the rules to find answers to the questions that I had. After several iterations of this, it all made sense.

The game plays well regardless of the number of players, and takes about the same amount of time. The only problem was fitting the larger groups around the table. Once you become a zombie, there is no way to make yourself distinctive from the other zombie players win wise. The remaining survivors get the glory of having survived for the win, but the zombie players are all just zombies, so there isn’t a lot of satisfaction from causing a full zombie apocalypse. I’ve had games where there are no zombies left for the zombie player to take, so they don’t do anything at all on their turn, which was no fun. This was an exception though, usually things get more and more desperate for the survivors as the game nears the end, and the zombies move in for the kill.

Pittsburgh 68 is a fun and easy game for the most part though. You feel the theme throughout the game, and I’m just amazed with the amount of gameplay that is packed into a single deck of cards. It’s like replaying a zombie movie over and over with different survivors each time, depending on the roll of the dice and the savvy of the players. It is fun to be the zombie master or a survivor, not as much to be a converted survivor though. The game is inexpensive, compact, and just as much fun with four players as with eight.